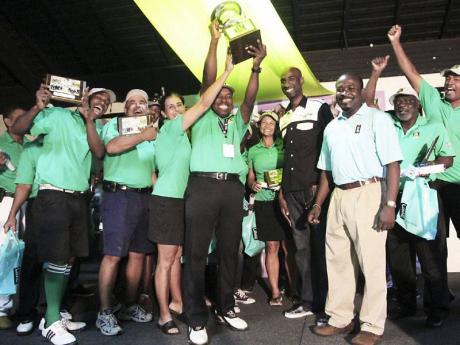 The intermittent showers and dark clouds that draped the Constant Spring Golf Club throughout Sunday were not enough to deter the second-time finalists, JustBet Springs, who etched their name on the region's premier team match play golf trophy, bettering defending champs Advantage Generals in an intriguing Lime Cup final.

Making the most of their familiarity with the course - it being their home ground - the Springs became the first team in the competition's history to finish the tournament without a single defeat, swinging their way to a commanding 8.5 to 3.5 win over the defending champions.

It was a fitting end to a campaign that saw the Springs chart an impressive course to their first Lime Cup title - a stroke better than their second-place finish last year.

It was Sunday's opponents that got the better of them in 2011 and more interestingly, their victory comes just two years after a last-place finish; enough reason for extra celebrations as the Carl Bruce-captained Springs finally managed to turn the proverbial corner.

Bruce was obviously elated with the victory and pointed to his team's experience as a major factor in their remarkable run this season.

"We have a very strong team. The greatest challenge was to find the best combination of players for this final, but in the end we went with players who had the most experience," said Bruce. "We decided that we were going to tough it out, everyone did a good job and we were able to secure a good victory.

"This is an amazing feeling, a lot of hard work went into this," Bruce continued. "We lost the final at Cinnamon Hill last season, but we felt we were underprepared, so we wanted to better that and the guys did a great job of getting ready for the competition this time around."

The Springs entered Sunday's title decider with a hot swing that saw them brush aside every opponent that they had come up against this season.

In the third place matchup, the Buccaneers of Appleton Estate ran out 7.5 to 4.5 winners over the Falcons, while the SportsMax MaxPak got a close eight to seven win over the Lime Lions in the consolation matchup.

The evening's activities concluded with an awards presentation, with the best captain award presented to CEEN Falcons' Livingstone Morrison and Top Junior Golfer to Victoria Samuels.

The male and female MVP awards, dubbed the Lindy Delpenha Awards, in honour of the veteran's significant contribution to the development of sports in Jamaica, were presented to Wesley Brown of Advantage Generals and Michelle Gabay of JustBet Springs, respectively.