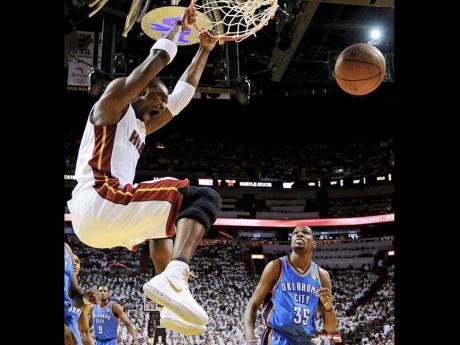 The Miami Heat have been here before, two wins from an NBA title.

The difference now? LeBron James isn't letting his head get in the way of his talent.

James had 29 points and 14 rebounds and the Heat took a 2-1 series lead with a 91-85 victory over the Oklahoma City Thunder on Sunday night.

Miami also won Game Three of the finals last year, but that was their last victory as the Dallas Mavericks stormed to the title. It was a painful failure for James, who looks determined to prevent a similar collapse.

Wade had 25 points, seven rebounds and seven assists for the Heat, who "carry that pain with us'' from last year, according to forward Chris Bosh.

"We think about it every day and that really helps us to succeed in this series,'' Bosh said.

James' poor performance was part of the problem then, but he seems on top of his game this time. His three-pointer sent the Heat to the fourth quarter with the lead and he scored five straight Miami points when the Heat were building just enough cushion to hold off another late flurry by the Thunder.

Kevin Durant had 25 points for the Thunder, but picked up his fourth foul in the third quarter and had to go to the bench when they seemed to have control of the game.

"It was frustrating,'' Durant said. "Of course, we had a good lead and they came back and made some shots. We fouled shooters on the three-point line twice. It's a tough break for us, man. You know, I hate sitting on the bench, especially with fouls.''