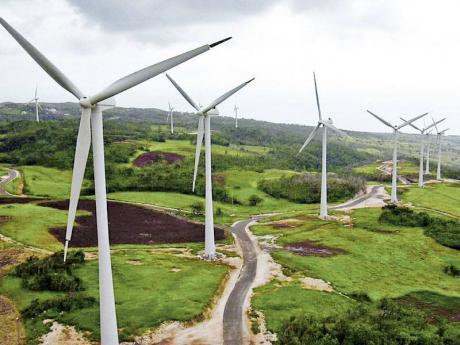 A section of Wigton's wind farm in Manchester, which provides renewable energy. - File

Caribbean Community (CARICOM) countries were rated in the lower half of a survey of 26 countries that examined their ability to foster low carbon energy growth.

Jamaica at number 16 topped the eight CARICOM countries included in the survey, undertaken by the Multilateral Investment Fund (MIF) of the Inter-American Development Bank (IDB) and Bloomberg New Energy Finance.

The other CARICOM countries in order of rankings were Belize, Barbados, Bahamas, Haiti, Trinidad and Tobago, Guyana and Suriname.

According to the IDB, the top countries were headed by Brazil followed by Nicaragua and Panama.

The IDB said that while Latin America and the Caribbean boast extraordinary renewable energy resources, the local clean energy sector is just beginning to gain traction, last year attracting less than five per cent of an estimated US$280 billion invested worldwide.

"For clean energy entrepreneurs, developers, and manufacturers, massive opportunities appear to lie ahead - if they can identify them. Similarly, government leaders could trigger a flood of new clean energy investment - if they can craft appropriate policy frameworks," the IDB said.

It said in order to bridge these gaps, the MIF in partnership with Bloomberg New Energy Finance created the Climatescope, the first annual report, index, and interactive web tool focused on the clean energy market in Latin America and the Caribbean.

It said Climatescope will be released on Tuesday during the Rio+20 United Nations Conference on Sustainable Development.

The Climatescope uses 30 indicators to measure the ability of each country to attract capital to build a greener economy, aggregated into scores from zero to five, with five representing the best investing environment. The highest ranked country was Brazil, but it only scored 2.6, indicating ample opportunity for improving conditions to attract more capital for low-carbon and renewable energy capacity.

"Climatescope is much more than a report," said Nancy Lee, MIF's general manager.

"It is an interactive and dynamic tool with rich data and in-depth country profiles that allow users to change the weights of each parameter to suit their needs. We hope that the Climatescope's unique combination of information on finance, policy, and market opportunities will have real benefits for facilitating green investment in Latin America and the Caribbean," she said.

Michael Liebreich, chief executive of Bloomberg New Energy Finance, said that over the past three years equipment prices have dropped to the point where unsubsidised clean energy is on the verge of being competitive with fossil fuels.

"For the moment, however, the sector still needs intelligent support mechanisms, and it certainly needs a raft of unhelpful barriers to be swept away," Liebreich said.

"What Climatescope does is measure progress on these fronts on a very granular level, measure by measure, country by country. It is the first time anyone has attempted to do this, and we think it will prove of enormous value as Latin American and Caribbean countries strive to attract funds to accelerate their green growth trajectories. We commend MIF and the IDB for backing this initiative," Liebreich added.

The report documented US$90 billion of cumulative clean energy investment in Latin America and the Caribbean between 2006 and 2011, with Brazil attracting close to 80 per cent of the total funds committed.

It said that renewable energy capacity can be installed in some parts of the region without the need for subsidies due to a combination of falling clean energy technology prices, high electricity prices and rising electricity demand.