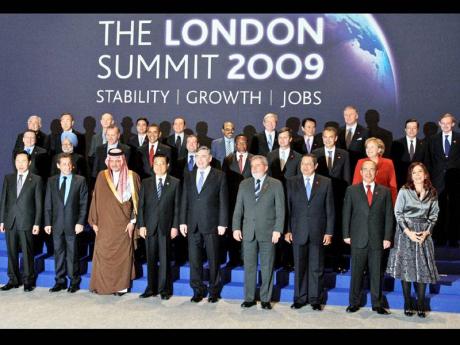 As depicted in the banner announcing the G-20 summit three years ago, world leaders have been shouting stability, growth and jobs for a long time. Those are the same issues that have come to the fore at the 2012 summit in Rio de Janiero, Brazil. - File

The leaders of the world's largest economies will say they are united behind efforts to boost growth and job creation to repair a global economy roiled by fears over the European financial crisis, according to a draft of the statement to be released at the end of the Group of 20 annual meeting.

The proposed declaration, however, stops short of committing the nations to greater spending unless conditions worsen. The draft, which could still be modified, urges fiscal responsibility while looking to education, innovation and infrastructure investment to spur economies.

It's far from certain, however, that the reassuring words will sooth markets whose harsh judgement of the official response to the crisis appears to be pushing Europe closer to catastrophe by the day. World stock markets remained mixed and nervous early Tuesday. But a consumer price inflation drop in Britain and word that Greece will be allowed to renegotiate its debt gave some hope for economic stimulus.

On Monday, less than 12 hours after a Greek election quelled worries that the country could make a devastating exit from the euro, fears about Spain drove that massive economy's borrowing costs dangerously close to the level where it would need a bailout, above 7 per cent.

The draft statement by the G-20 leaders includes language that appears aimed at easing the Spanish crisis. It tries to reassure investors that Spain's treasury won't end up eating the costs of the up to £100 billion rescue of Spain's banks announced this month.

"Euro area members of the G-20 will take all necessary policy measures to safeguard the integrity and stability of the area ... and break the feedback loop between sovereigns and banks," the statement says.

It singles out China and Saudi Arabia for commitments to global economic well-being, lauding a Saudi pledge to keep oil prices from going too high by ramping up production from its massive reserves. It praises China for a promise to move away from policies that keep its currency artificially low, giving Chinese exports a price advantage on world markets.

"We are united in our resolve to promote growth and jobs," the draft says, declaring that the leaders will announce the "coordinated Los Cabos Growth and Jobs Action Plan" to achieve those goals, although the draft does not provide details of the plan.

"Strong sustainable and balanced growth remains the top priority of the G-20, as it leads to higher job creation and increases the welfare of people across the world," the statement reads.

As G-20 officials wrangled over last-minute changes in the wording of the statement, European leaders at the summit struggled to reassure the world that they were on the path to solving their relentless economic crisis.

The cost of bailing out Spain's £1.1 trillion ($1.39 trillion) economy would likely outstrip current global ability, even after the International Monetary Fund announced late Monday that a round of contributions had increased its lending capacity to $456 billion, exceeding a round of pledges made in April. The countries making the biggest IMF contributions will be Japan, at $60 billion, Germany, at $54.7 billion, and China, at $43 billion. The United States is notably not contributing in the latest round.