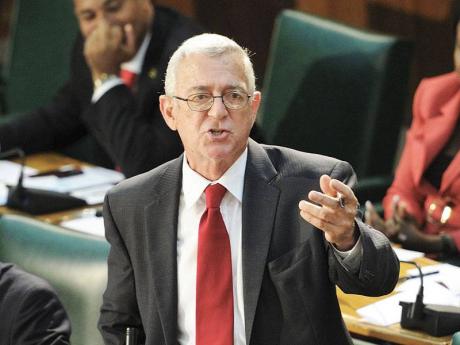 Minister of Education Ronald Thwaites makes his contribution to the 2012-2013 Sectoral Debate in the House of Representatives yesterday. - Ricardo Makyn/Staff Photographer


WITH RESULTS for the Grade Six Achievement Test (GSAT) now due, the Government is pleading with parents and students to accept the high-school places assigned to them.

Education Minister Ronald Thwaites, making his contribution to the 2012-2013 Sectoral Debate, told the House of Representatives that the results of the GSAT, the exam used to place students in high schools, will become available today.

Describing the GSAT as the "apartheid of the education system", Thwaites said "this high-stakes terminal examination wreaks fear and trauma among parents and children alike, all because of the perceived and the real absence of quality secondary places".

In his plea to parents and students, Thwaites said: "Grow where you are planted; work with your child's school to make it better."

Marcia McCausland-Wilson, president of the National Parent Teacher Association of Jamaica, is singing from the same hymn sheet as the minister.

"What we want is for parents to understand that this year, because the grades are good, students who have done well will be placed at upgraded high schools and they can perform well nonetheless," McCausland-Wilson told The Gleaner.

She added: "I can only say to the students, bloom where they are planted; and parents, wherever the students go, support them and help build the schools."

Thwaites said this year's GSAT results show improvements in the national averages for each subject.

"The scores of students going into all schools have increased," he said.

The minister said this year, all schools will be receiving students who are better prepared for secondary level education.

He also said the ministry was satisfied that there was no corruption of the exams.

In the meantime, the minister has appealed to educators to ensure they improve the quality of their output. Thwaites said they should take as much of the first term in Grade 7 to get to know new students.

"Use their grade profile from primary school to assess their instructional challenges; bond with their parents, find out who needs breakfast, eyeglasses, a place to do homework, who has an emotional or social problem ... ," Thwaites said.

He told the House that GSAT robs the children of extra-curricular life and is "cramming their heads with excess material that they will never use and which is no real test of their ability or their aptitude for high school."

Former Education Minister Andrew Holness had commissioned a report into the efficacy of GSAT, which is due in October.

"A new format is being developed which will better test from grades four to grade six the aptitude and skills with appropriate age-related content rather than the regurgitation of memorised facts," Thwaites said.

"The change will take some time to complete but we must begin by the exams next March."

According to the minister, the main reason why some secondary schools do not perform as well as others is that of the readiness of students received in Grade 7.

"What is a teacher in Grade 7 in Kemps Hill, a fine school, to do when their average score is below 25 or 30 per cent by comparison to a school that is receiving students at 85, 90 and 95 per cent?"

He added: "It is unfair to compare a school whose intake average is over 80 or even 90 per cent with one whose students have not scored over 30 per cent."