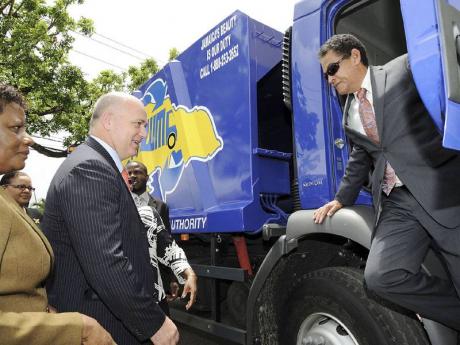 World Bank representative Giorgio Valentini (centre) and Jennifer Edwards (left), executive director of the National Solid Waste Management Authority (NSWMA), look on as Minister of Local Government and Community Development Noel Arscott climbs out after test-driving the new compactor truck that was handed over to the NSWMA during a ceremony at the authority's St Andrew offices yesterday. - Ricardo Makyn/Staff Photographer

Nine inner-city communities within the regions of Kingston, St Andrew and Spanish Town, St Catherine are to benefit from World Bank investments in the amount of J$38.8 million towards waste collection equipment and a training project that falls under the Inner City Basic Services Project (ICBSP).

This assistance is to be implemented by the Jamaica Social Investment Fund (JSIF).

A memorandum of understanding (MOU) was yesterday signed between the National Solid Waste Management Authority (NSWMA) and the JSIF at the NSWMA's St Andrew offices.

"For the NSWMA, the collection and disposal of waste is very important," Edwards told The Gleaner.

"What we have found is that in a number of communities people have stated that waste was just thrown on the side of the roads and that creates problems as that attracts more rodents and other animals. People of unsound mind and sometimes even mischievous children just throw the garbage on these roads," she added.

A garbage compactor truck valued at approximately $13 million was also handed over at the ceremony. A total of 55 waste collection receptacles have already been handed over as well, along with concrete enclosures to secure these receptacles and improve the aesthetics in communities such as Tawes Pen and Central Village.

"This sanitation project will go a long way towards improving the social conditions of residents in all nine ICBSP target communities. We at JSIF also regard it as an important opportunity to fulfil the mandate given to us by the Government of Jamaica to improve the economic outlook of our poorest citizens as a healthy environment is fundamental to development," said Scarlette Gillings, managing director of the JSIF.

World Bank representative Giorgio Valentini described Jamaica as a beautiful country and stated that the bank's reason for embarking on this campaign was to help instill moral pride and a sense of social responsibility among all the country's citizens.

"Anything you do in changing the economic development of a country starts with self responsibility. Self-responsibility is also making sure that your waste is collected through the proper channels," he added.