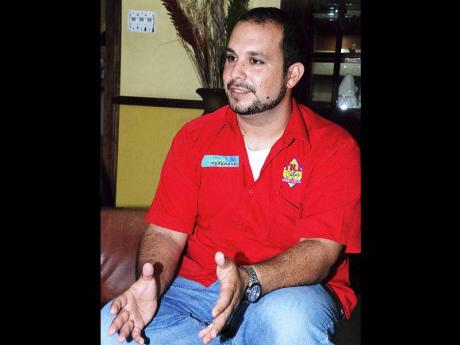 Victor Handal said although he studied overseas, he returned home because he prefers to live in Jamaica. At right: Victor Handal of Tile City shows how paint, in new and exciting colours, is mixed using computer technology. - Photos by Colin Hamilton/Freelance Photographer 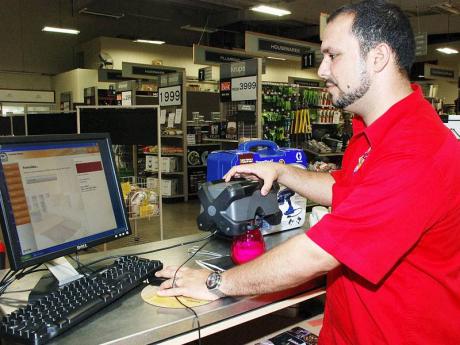 Victor Handal knows that when a building is constructed, something must go on the floor, for that reason, he aims to have everyone turn to Tile City for that solution.

"Concrete is unattractive, carpets will become dingy, wood requires high maintenance, but tiles are durable and low maintenance," Handal listed in making a case for the use of tiles.

With two locations - one along the Mandela Highway in close proximity to the Hydel Group of Schools, and a second at 114 Constant Spring Road in St Andrew, Handal is the managing director of the family owned business.

Now in its sixth year, Handal worked his way up to his present position from holiday jobs during summer break. The rest of the management team comprises his parents and sister.

"I began working in Florida after I finished studying, but returned home because I prefer to live here," he told The Gleaner in an interview.

Handal handles key customers, inventory, training and product knowledge, and the family takes care of the other aspects of the business.

Part of his mandate is also to take Tile City from being merely one among many to the go-to player in the field.

He maintained that Tile City is already ahead of the game as it focusses on building solid relationships with suppliers, whether they be in Spain, Italy or Brazil, and that augurs well for customers.

In keeping with its name, Tile City prides itself on having the largest variety of tiles.

"We have just about the largest inventory of tiles for all purposes," Handal said confidently.

Focussing on the market

Additionally, they stay ahead of the competition by stocking new products as soon as they are launched overseas, and doing the necessary research to come up with products suited to the Jamaican market.

So, as the building and construction sector starts to rebound, the team at Tile City has decided to rethink its marketing strategy to transform itself into the ultimate hardware store.

"We are looking to eliminate the customers' need to shop overseas, so in the near future, we will be designing a three-dimensional model for bathrooms, kitchen and closets," he revealed.

The plans also include designs for hardwood floors, the continued mixing of paint, in any colour the imagination can conjure, and workshops conducted by foreign and local experts who supply goods.

"These workshops are designed to give our staff more product knowledge so that they can be armed to serve when customers come in, Handal said.

Handal who is the consummate salesman, is affable and a natural leader who has the ability to make customers feel like friends. He has held his present post since 2007, having studied engineering at Florida International University and automotive technology at Miami Lakes Technical ... and he is a certified representative of the world-famous Moen brand of faucets.

And as the hurricane season gets going, Handal told The Gleaner that they have the following items in stock:

Batteries to power everything from hearing aids to car keys

Small generators starting from approximately $30,000.00 for a 1,800-watt size, capable of powering light bulbs and the fridge in a small house, to bigger standby generators of 13,000 watts, capable of running a building the size of his store in case the power goes. To power all the lights in your house plus a television set, fans and a fridge, you will need to get a generator that has at least 5,000 watts.