First Global to the rescue! 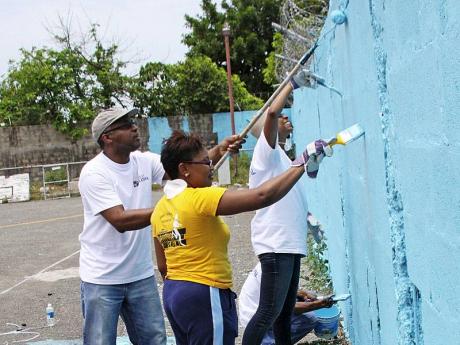 Employees of First Global Bank and First Global Financial Services, along with Alaine Laughton (stooping), spokesperson for First Global's 'Music, Perfect Pitch for a Sound Education', pose for the camera after successfully completing their project of painting and refurbishing the multi-purpose court at the Seaward Primary School in St Andrew on Saturday. 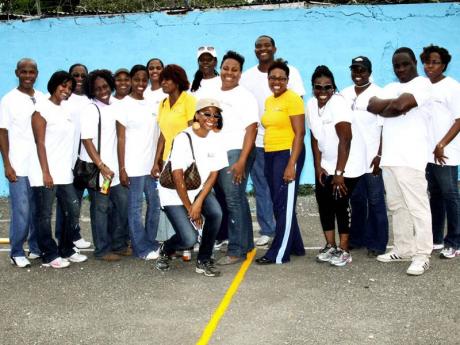 The specific work included the preparation and painting of the fence measuring some eight by 100 feet; replacing basketball backboards, along with strengthening the hoops and their support, as well as painting them. The ground lines were also painted. All materials were provided by the donors - First Global Bank and First Global Financial Services.

The work was undertaken by employees of the donating companies, who all volunteered their time and labour. Technical support was provided by Anderson Decorators, which also volunteered its services.

The total value to execute the project was estimated at approximately $200, 000. The exercise was originally earmarked to have been one of FGB/FGFS' Labour Day projects across sections of the island, but was shifted.

President of First Global Financial Services, Robert Drummond, said, "It is an opportunity for us as a company to get more involved in improving the holistic environment for learning, enhancing the aesthetics and improving the sports facility."

He added that the school's library would also be equipped, revealing that his organisation is in the process of sourcing books towards this.

Meanwhile, principal of the school, Arlene Thomas, expressed her pleasure for the facelift given to the institution.

"We are appreciative of what is being done, I am thankful that corporate groups can come to assist us," she noted.

"It will greatly enhance the physical education programme," Thomas added.

Spokesperson for the First Global programme, Perfect Pitch for a Sound Education, singer Alaine Laughton, was among the work team.