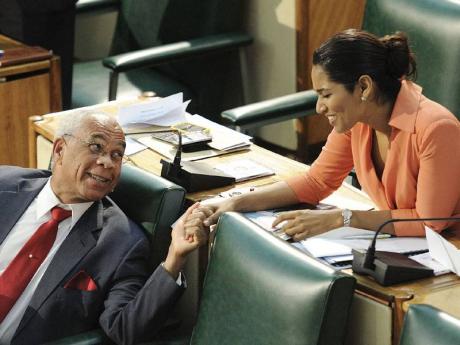 Minister of Youth and Culture Lisa Hanna shares a joke with her colleague, Omar Davies, minister of transport, works and housing, during the Sectoral Debates in Kingston, Jamaica, yesterday. - Ricardo Makyn/Staff Photographer

Caribbean Community (CARICOM) countries were rated in the lower half of a survey of 26 countries that examined their ability to foster low carbon energy growth.

Jamaica at number 16 topped the eight CARICOM countries included in the survey undertaken by the Multilateral Investment Fund (MIF) of the Inter-American Development Bank (IDB) and Bloomberg New Energy Finance.

The other CARICOM countries in order of rankings were Belize, Barbados, Bahamas, Haiti, Trinidad and Tobago, Guyana and Suriname.

According to the IDB, the top countries were headed by Brazil, followed by Nicaragua and Panama.

Potential yet to be realised

The IDB said that while Latin America and the Caribbean boast extraordinary renewable energy resources, the local clean energy sector is just beginning to gain traction, last year attracting less than five per cent of an estimated US$280 billion invested worldwide.

It said in order to bridge these gaps, the MIF, in partnership with Bloomberg New Energy Finance, created the Climatescope, the first annual report, index, and interactive web tool focused on the clean energy market in Latin America and the Caribbean.