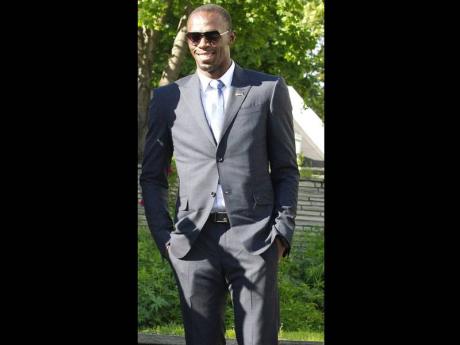 
Triple Olympic champion Usain Bolt sprinted away with over $1.8 billion over the past 12 months, according to leading business news publication, Forbes Magazine, which recently released its list of the world's 100 richest sports personalities.

Bolt, who has been the poster boy for athletics since romping to three gold medals and world records at the 2008 Olympic Games in Beijing, China, has gone on to dominate his events over the past four years, all this time raising the value of the sport and, by extension, his brand.

His US$20.3 million earnings leaves him in the number 63 position, and again makes him the only track and field athlete among the 100 highest-paid sports personalities. The list accounts earnings between June 2011 and June 2012.

Like all track and field athletes, Bolt earns comparatively less in salary and winnings than individuals in other sporting disciplines, but he is one of the most sought-after personalities for companies across the world, with one of the most recognisable and endearing images in international sports.

Bolt is believed to command in the region of US$300,000 in appearance fees per track meet.

The bulk of the athlete's earnings come from his numerous commercial deals, with Forbes accrediting US$20 million of his US$20.3 million income to endorsement arrangements with companies such as Puma, Hublot and Gatorade.

Bolt's contract with Puma is his largest to date and is believed to be in the region of US$10 million - one of the largest shoe-company contracts in the world.

The Jamaican recently added Japanese automakers Nissan Motors to his ever-growing list of partners, after recently agreeing to feature in the company's global campaign to promote the 2012 Nissan GT-R.

Controversial boxing star, Floyd Mayweather, tops the list after raking in US$85 million (J$7.8 billion) to unseat another controversial figure, golfer Tiger Woods, who had been the top moneymaker since 2001.

Mayweather only fought twice in the past 12 months and spent less than an hour in the ring.

All of Mayweather's earnings came from his winnings, as he does not have a single endorsement deal.

Fellow boxer Manny Pacquiao is the second highest paid with earnings of US$62 million (J$5.5 billion), with Woods rounding out the top three with US$59.4 (J$5.2 billion).

Woods, who has won over US$100 million in prize money throughout his career, lost some ground after sponsors such as Gillette and Tag Heuer decided not to renew their sponsorship. He still, however, makes the bulk of his money from endorsement deals, with sponsors accounting for US$55 million of his earnings last year.

Miami Heat star LeBron James is number four on the list with US$53 million (J$4.7 billion) in his pocket over the past 12 months.

Forbes noted that their figures included salaries, bonuses, prize money, appearance fees, licensing and endorsement revenue for the period June 2011 to June 2012. Taxes and agent fees are not deducted.