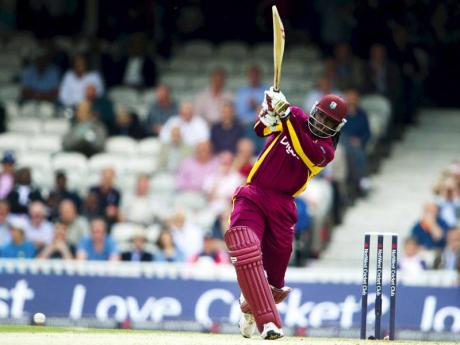 Sent in to bat, West Indies produced a limp display and needed Bravo's top score of 77 and Gayle's robust 53 to get up to 238 for nine of their 50 overs.

In reply, Cook hardly put a foot wrong in 112 off 120 balls as his side coasted to their target with five overs remaining, to secure an unassailable 2-0 lead in the three-match series.

He added 122 for the first wicket with Ian Bell, who scored 53, and put on another 81 for the second wicket with Jonathan Trott, who finished on 43 not out.

West Indies captain Darren Sammy was his side's best bowler with two for 46.

Chasing a victory to level the series, West Indies got a rollicking start from Gayle, in his first international for West Indies in 14 months.

The giant left-hander, whose build-up to the game was shrouded in injury concerns, stroked three fours and five typically huge sixes off 51 balls in helping to post 63 for the first wicket with Lendl Simmons (12).

He started quietly, gathering a mere two runs from his first 10 deliveries, before exploding with three consecutive boundaries off lanky pacer Steven Finn in the sixth over of the innings.

Three overs later, he deposited Anderson over the mid-wicket boundary for his first six and then followed up in the next over with three amazing straight sixes off seamer Tim Bresnan's first over that cost 18 runs.

Gayle seemed poised to unleash more fireworks when he fell in controversial fashion, belatedly given out lbw by umpire Tony Hill following an elongated appeal by off-spinner Graeme Swann.

The decision was reviewed and though replays showed the ball hitting the bat, they were unable to determine if it was pad or bat first and Hill's decision stood, much to Gayle's disgust who lingered before leaving the field.

Without a run added, 10 balls later, Dwayne Smith swung at a wide Broad delivery and edged behind without scoring, and Simmons's 50-ball labour ended suicidally when he took on Cook's arm at mid-off and lost the gamble at 79 for three in the 21st over.

With England's bowlers drying up the runs, Marlon Samuels (13) holed out to deep mid-wicket off Broad four balls later to leave the Windies in a spot of bother.

Bravo found an ally in Kieron Pollard and together they added an even hundred for the fifth wicket to pull the Windies around.

They started circumspectly with just eight runs coming from the next five overs, before blossoming to score freely in the middle overs.

Bravo, dropped on 18 by Eoin Morgan at deep mid-wicket off Swann in the 31st over, stroked eight fours and two sixes, while Pollard counted three fours and one six in his 41 off 52 balls.

They had gathered 46 runs from the last power play when Pollard tried to swat a bouncer from Bresnan out of the ground and was held at deep mid-wicket by Anderson in the 40th over.

Bravo and Sammy added 41 off 35 balls for the sixth wicket before Sammy chipped a simple catch to Morgan at point off Finn, after cracking a four and a six in scoring 21 from 20 balls.

There was no late acceleration as the last four wickets fell for 17 runs off the last 26 balls of the innings, with Bravo eighth out skying to Ravi Bopara at cover off Anderson in the penultimate over.

Cook and Bell then erased any thoughts the Windies had of an early breakthrough, as pacers Ravi Rampaul and Tino Best proved ineffective. The left-handed Cook hit 13 fours and a six while Bell, who scored a century in the opening ODI at Southampton, counted seven fours off 64 balls.

West Indies were forced to wait until the 22nd over before picking up a wicket when Sammy had Bell taken at cover by Gayle, but Cook and Trott saw England past 200 and within sight of victory.

Cook smashed Sammy over long-on for his only six, but attempting another big shot of the next ball, skied a catch to Simmons at mid-off.

Man of the Match: Alastair Cook.