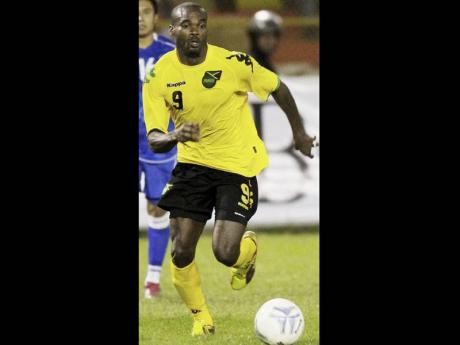 
Revenge. It's not the exact word Omar Cummings uses to describe his burning desire for Jamaica to beat the United States in football for the first time at the senior level.

But his tone - serious and direct whenever the subject rises - betrays the national striker's intentions.

For Cummings, helping to shatter the American Dream when Jamaica face the US on September 7 and 11 in the semi-final round of CONCACAF World Cup Qualifying runs deeper than boosting Jamaica's chances to advance to the final stages. It would also help silence the constant taunt - mostly good-natured - he hears while playing in Major League Soccer (MLS): Jamaica are not good enough to win against the US.

It makes him cringe.

"(Beating the US) is for national pride," Cummings explained days ahead of his scheduled return to action with Colorado Rapids, after being sidelined over a month with an ankle sprain.

To make matters worse, Cummings, an MLS All-Star and one of the most dangerous forwards in North America's top league, has never had an opportunity to directly influence the outcome of 18 internationals played between the countries since 1988.

The Reggae Boyz lost 10 and drew eight. His most recent opportunity was the 2011 CONCACAF Gold Cup, but another ankle injury snuffed out that wish. The US beat Jamaica 2-0 in the quarter-final, ramping up Cummings' anticipation for the next contest.

"I have never played against them (US) before," he said. "It's something that I definitely look forward to."

His first step is to get fit again, score goals in MLS and earn a recall to the national team. That won't be simple. Luton Shelton, Ryan Johnson, Marlon King, Ricardo Fuller and Tramaine Stewart are already ahead of him for starting spots at forward.

"I hope to play then," he said last Thursday. "I've been practising with the team. I would hope once I'm fit and ready I would get the call (for Jamaica). It's up to the coach (Theodore Whitmore)."

Despite his own desire to beat the US, Cummings, probably the Boyz's best all-round attacker, knows teamwork will be key to breaking Jamaica's winless streak against the US. He watched the Boyz's first two qualifying games - a 2-1 home win against Guatemala followed by a 0-0 draw with Antigua and Barbuda away - with mixed reviews.

"The first game was good," he said. "But the last I think we should have done better. We might consider ourselves lucky. It was good to get a clean sheet, but I was thinking we could get three points."

However, Cummings believes Jamaica is on the right track towards World Cup 2014 in Brazil. Advancing from the semi-final group should not be a major problem. Jamaica and US are tied atop the group with four points each.

"I definitely see Jamaica coming out of this round," he said. "No reason we shouldn't."

But a tricky set of obstacles loom in September and fate has not been kind to Jamaica against the US. The Boyz have come close to upsetting the Americans, but appeared jinxed a few times. In October 1997, for example, during the 'Road To France' campaign, the US were wrongly awarded a penalty in Washington, DC, although the ball was clearly handled outside the box in a 1-1 draw. In August 2004, a painful defensive error in time added on cancelled Jamaica's 1-0 lead at the National Stadium.

Cummings, who has played against many of the current US squad in MLS, believes Jamaica must solve the mind game against the US, along with winning the physical battles, on the field.

"I think obviously it's a mental thing because we haven't won," he said of Jamaica's unflattering record against the US.

The Americans, however, are never to be underestimated, explained Cummings, but he's unsure if most Jamaicans share that view.

"I think Jamaicans probably underrate the US, but not the (Jamaican) players," said the speedy and skilful 29-year-old from Old Harbour, who has scored seven goals in close to 30 appearances for the Boyz.

"We respect them. (But) we probably showed them too much respect (at the Gold Cup)."

The September showdowns will tell what the Boyz have learned. The first game is in Kingston. Advantage Jamaica. But Cummings believes he will also have an edge for the return leg if he plays. He enjoyed a successful university career in Ohio, the US state that will host the September 11 rematch.

Less than three months away, Cummings can already feel mounting enthusiasm to confront the long-standing foe.

"Definitely," he said. "Especially because it's the US and it's kinda in my backyard, hour-and-a-half from my college."

Sounds like a perfect plot for revenge, even if Cummings doesn't say it.