Gore and his Audi Germany bound 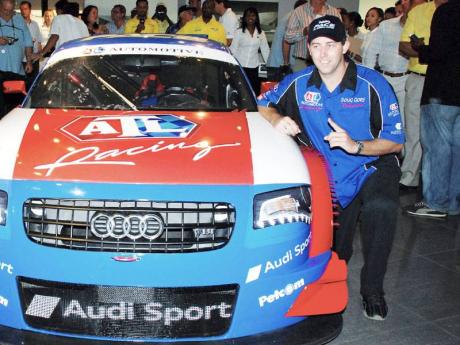 Doug Gore poses beside his Audi TT before the accident. - file


The Doug Gore-driven Audi TT DTM that crashed about three weeks ago during the Caribbean Invasion circuit-racing meet at Dover is being shipped out to Germany this week, where a comprehensive assessment of the damage will be done.

Once it is determined that the car will not be written off, it will be rebuilt and will return to Dover even more powerful than before.

That's the word from Adam Stewart, CEO of Sandals Resorts International and the ATL Group, who reveals that ATL Automotive is committed to Gore and racing at Dover.

The 400-plus horsepower, ATL Automotive-sponsored Audi was flown in from Europe last season and helped Gore break David Summerbell's stranglehold on circuit racing at Dover.

However, mere months after Gore dethroned Summerbell as the King of Dover at the Caribbean Invasion meet in late May, the unthinkable occurred. During the first race of the Caribbean Motor Racing Championships, the Audi and veteran driver Peter Rae's modified RX7 made contact, causing the Audi to spin out of control and slam into a tyre wall at the racetrack.

The damage was extensive and fears emerged that the racing days of the Audi at Dover were over. Gore also expressed his own fears that should the race car be written off his long and storied career was also at an end. The ATL CEO, however, has moved to allay those concerns.

Stewart, who threw the weight of ATL's support behind Gore's bid for dominance at Dover through a three-year deal with the veteran driver, explained that before it arrived in Jamaica, the Audi raced for a few years on the Deutsche Tourenwagen Masters Circuit in Europe, therefore, replacement parts should be available. However, the car will not return to Jamaica as it was.

"The engine is totally fine and has the capacity for significantly more power," he said, intimating that the Audi will return with the kind of power that will challenge Summerbell's Evolution 8 that is much faster than it was last season.

He added: "The plan is to come back with increased power."

The search for additional power is one of the reasons why Gore will also be flown to Germany with the car. According to Stewart, Gore will be running the car on the track during tests over there while the German engineers conduct research and development.

Stewart said ATL is committed to racing at Dover and the company is fully committed to the deal they signed with Gore. The only way they would not return to Dover, he said, is if the car is unable to be repaired. If that is the case, then it would be too expensive to continue.

Stewart, however, is optimistic that the car will be able to be restored to good racing condition, which will allow Gore to resume his thrilling battles with Summerbell; battles that have helped circuit racing win more fans.

"We will be back. We love the sport too much," Stewart said. "Besides, unbeatable never quits."