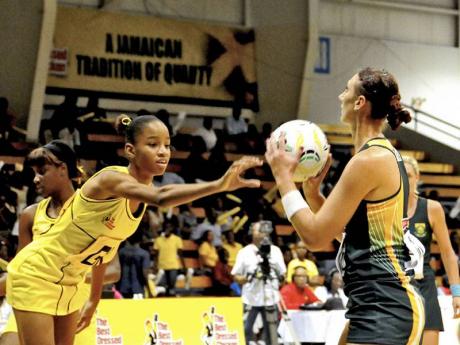 Jamaica's Sunshine Girls failed to whitewash the South Africans in the final game of their three-Test Jamaica Netball Association (JNA) Supreme Ventures Sunshine Series when they were beaten 56-49 by their opponents at the National Indoor Sports Centre last night.

The world's number four-ranked Jamaicans had registered impressive victories - 63-48 and 61-46 in Friday and Sunday's games, respectively - over the South Africans.

Goal shooter Jhaniele Fowler, who had an impressive series for the local girls, led the Sunshine Girls with 40 goals from 44 attempts. She received support from Ann-Kay Griffiths, who added nine from 10 tries.

The South Africans came out firing on all cylinders in the opening quarter as they quickly established a five-point lead at 10-5, with Bootha scoring nine of her team's 10 goals.

This led Jamaica's coach, Oberon Pitterson-Nattie, to call a time-out with six minutes remaining in the period as the defensive pair of Malysha Kelly and Shameera Sterling were outplayed by the South African shooters.

However, the determined South Africans held their composure against a flat-looking Sunshine Girls unit to take a 17-13 lead at the end of the period.

The Jamaicans showed a lot guts in the second stanza and fought hard against the swift-moving South Africans to cut the deficit to one point, before slipping again to trail 30-27 at half-time.

Pitterson-Nattie replaced Sterling with Sabrina Spence after the interval and the move paid off for Jamaica as they quickly erased the deficit and in the process outscored their opponents 17-8 to take a 44-38 lead at the end of the third quarter.

Fowler was also brilliant for the Jamaicans as she netted 15 of Sunshine Girls' 18 goals.

The Jamaicans were dealt a major setback at the start of the final quarter when the 6ft 5in Fowler was injured and had to be replaced by the much shorter shooter, Vannessa Walker.

The South Africans took advantage of this as they scored nine unanswered goals to take a 47-44 lead midway the period.

Despite a late rally by the Jamaicans, South Africa fought gallantly down the stretch and held their nerve for the victory.