Tyson to take a biteout of Broadway 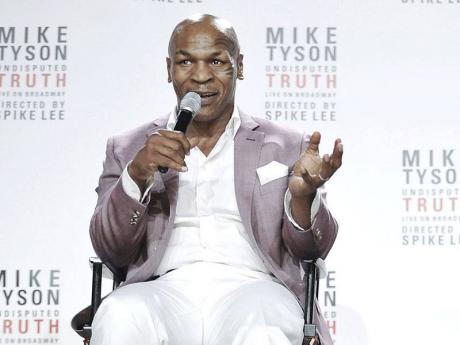 Mike Tyson wants his next knockout to be on Broadway.

The former boxer announced Monday that he will team up with director Spike Lee to bring his one-man show, Mike Tyson: Undisputed Truth, to the Longacre Theatre for six nights only, July 31 to August 5.

The show, a raw confessional on the highs and lows of the life of the retired heavyweight and tabloid target, will mark both Tyson's and Lee's debut on Broadway. It made its debut in April for a weeklong run at the MGM Grand in Las Vegas.

"I'm very vulnerable and I'm just telling you who I am and where I'm from and how this happened," Tyson said at a news conference at the Longacre, wearing white pants, a white shirt and a grey jacket.

Tyson, like Lee a Brooklyn native, became the youngest-ever heavyweight champion in 1986, when he won his title as a 20-year-old. His life since then has been marred by accusations of domestic violence, rape and drug use.

Tyson, 46, said he was inspired to do a one-man show after watching Chazz Palminteri tell stories about growing up in his show 'A Bronx Tale.' The boxer said: "I'm really just excited about this genre here."

Tyson said that the show would be "raw" and "filthy" and that he would show his vulnerable side. It will include tales about his stormy marriage to actress Robin Givens, his time in prison, his relationship with his trainer and surrogate father, Cus D'Amato, and the time he spent in a psychiatric clinic as a result of his addiction to cocaine. One story sure to return is one in which he spotted Givens returning to her home in his car with Brad Pitt.

Lee is the director behind such films as Do the Right Thing, Malcolm X and Inside Man, and much of his films make bold statements about race relations in the United States. He said he saw a DVD recording of Tyson's show in Las Vegas and immediately signed up. The pair will start work on it after the July Fourth holiday.

"It's a great story and he tells it masterfully," said Lee, who calls it a tale of redemption that only needs some tweaking from the Vegas edition. "He's lifted himself off the canvas."