Windies 'A' cruise to 10-wicket win 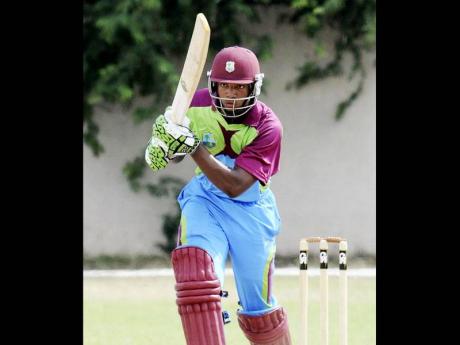 Test opener Kieran Powell hammered an attacking, unbeaten half-century to complete an outstanding match as West Indies 'A' crushed India by 10 wickets on the final day of the third and decisive unofficial 'Test' here yesterday.

The left-hander finished on 56 not out from just 50 balls, a high-tempo innings that saw the hosts to their target of 97 with no loss of wickets, 35 minutes before lunch at the Beausejour Cricket Stadium.

The victory handed West Indies 'A' a 2-1 verdict in the three-match series, after they lost the first 'Test' by two wickets in Bridgetown, but rebounded to win the second by 125 runs in Kingstown last week.

Earlier, seamer Kevin McClean took the two remaining Indian wickets as the visitors, resuming on 181 for seven, were dismissed for 202. He finished with five for 57, while left-arm paceman Delorn Johnson ended with three for 54.

Wriddhiman Saha added only four to his overnight 48, while Shami Ahmed was unbeaten on 33 when the innings closed.

Robin Bisht did not bat because of a hand injury.

Powell and Kraigg Brathwaite, who was unbeaten on 36 from 57 balls, then saw the Windies safely to their target with contrasting innings.

While Powell cracked eight fours and two sixes, the obdurate Brathwaite was content to strike five fours, as West Indies reached their target in quick time.

The 22-year-old Powell, who scored an attractive 139 in the first innings, started in high gear this time around, tearing into seamer Parvinder Awana with a couple of boundaries.

He spectacularly launched the right-armer over cover for his first six to take Windies 'A' past 50 and also lofted off-spinner Jalaj Saxena into the same area for his second six a few overs later.

Powell brought up his half century off just 47 balls with his seventh four, another sublime off-side drive.

Both teams will travel to Trinidad today to prepare for the two-match Twenty20 series on Saturday and Sunday at Queen's Park Oval.