Fast-rising Barnes wants to 'do something special' 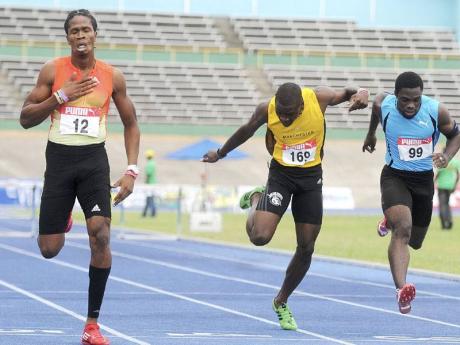 Having surprised himself at the two-day Supreme Ventures Limited Jamaica Athletics Administrative Association (JAAA) National Junior Championships at the National Stadium, Racers Track Club's Shavon Barnes is looking to take his performance to the next level.

In the boys' Under-20 400 metres hurdles, the former Camperdown High athlete raced to a lifetime best 50.81 seconds to win the event, beating quality athletes Jarvarn Gallimore of Jamaica College and Omar McLeod of Manchester High.

"I am happy, but I am not going to be satisfied with my performance on Saturday as I want to build on that and do well for Jamaica and this has only helped me to focus more and work much harder as I want to do something special in Spain," said Barnes, looking forward to the World Junior Championships.

The time registered by Barnes on Saturday put him at number three on the World Junior International Association of Athletics Federations' list, as only Felix Franz of Germany, 50.48, and the United States' Eric Futen, who won at the United States trials on Saturday with 50.73, have run faster this season.

Barnes actually went out very fast and asked if he was a bit concerned, he said: "No, I was not worried when I went out that fast because in training that is how I practice to run as my coach always tells me to run the first 350 metres very hard and then take it from there, and that is what I did because that momentum helped to take me to the front as I know that I have the strength also to maintain that."

It is a great improvement for the 19-year-old Barnes as only a year ago, at the Inter-Secondary Schools Sports Association Boys and Girls' Championships, he failed to reach the final.

At a recent JAAA All-Comers Meet, Barnes continued to improve, running a then personal best of 50.92.

Barnes credited his great improvement with his first year at the Racers Track Club.

"I think working alongside some world class athletes has helped me a lot, and more technical work on the event from my personal coach Kevin Pryce has helped a lot; and also my 800 metres background work in high school from coach Jermaine Shand at Camperdown, it has really helped me to adapt well to the event," he said.

The athlete is extremely pleased with his performance on Saturday and hopes to go even faster.

"I am extremely happy to know that I was able to win the event and also to run a personal best," said Barnes, who was seen pointing towards the grandstand after his win.

"I was pointing towards my mother as I told her that I was going to win on Saturday for her, and I knew she was very nervous before the event," he continued.

"I was a bit surprised with the time, because when I ran my previous personal best at the All-Comers meet a few weeks ago I thought that was it, but now I am more motivated to go even faster."