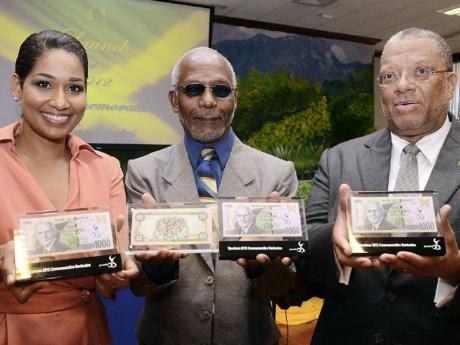 Carl Wauchope (centre), one of the children on the back of the commemorative $100 note, along with Lisa Hanna, minister of youth and culture, and Dr Peter Phillips, minister of finance, planning and public service, at the launch of a series of banknotes that Bank of Jamaica will issue in July to commemorate the 50th anniversary of Independence in August. The launch was held on Tuesday in Kingston. - Rudolph Brown/Photographer

THE BANK of Jamaica has unveiled a new-look Jamaican currency in commemoration of the country's Golden Jubilee.

Circulation of the currency, which will feature the national logo for the 50th anniversary of Independence, as well the return of the common vignate - the photograph of a group of children from class of 1962 at Central Branch Primary School depicting the National Motto on the reverse - is expected to commence on July 23.

The photo of the students previously appeared on the reverse of the $2 banknotes which were in circulation between 1969 and 1994.

"The bank was established before Independence as part of the institutional infrastructure that was to be the cornerstone of the new Jamaica.

"A financial superstructure has evolved over the years that is far more healthy and in deed sophisticated than that of many other larger and older nations," he said.

The notes will also be printed on more durable substrates in an effort to extend the useful life of the notes.

The new substrates is expected to last two to three times longer than the cotton materials, which has a relatively short useful life in the country's tropical climate and other circulation conditions.