Jazzing in the rain 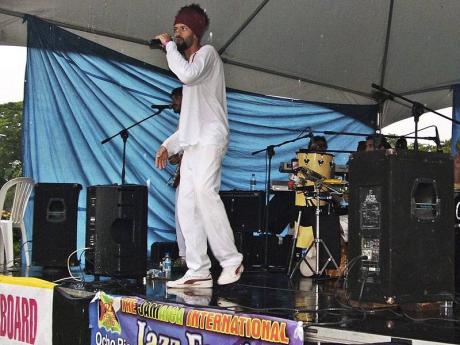 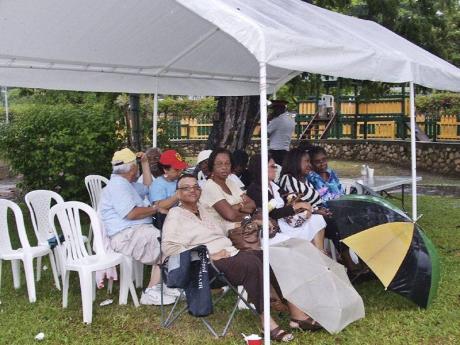 A smattering of patrons who braved the weather at the Jamaica International Ocho Rios Jazz Festival take shelter under a tent while enjoying the show last Sunday. - Photo by Carl Gilchrist
1
2

Rain kept away the usual turnout of fathers for the final leg of the 22nd Jamaica International Ocho Rios Jazz Festival at Turtle River Park in Ocho Rios last Sunday. But the show went on.

"The show went on, the show has to go on," said promoter Myrna Hague. "My star act from Brazil (Ba-Boom) is leaving tomorrow, so the show had to go on so that the fans could hear them."

And the few fans who braved the weather were not disappointed with Ba-Boom or, indeed, with the performances of the other acts on the show. Holed up under tents and umbrellas, those fans still enjoyed what was presented.

"The show was great, great - very good. I enjoyed it to the max," said Bill Henry of St James, who has become a regular at the jazz festival each year.

He was not able to do his usual dancing and prancing this year, but instead had to seek shelter under an umbrella for the duration.

"The performances have been fabulous, rain or no rain," Hague said. "The rain started before the show started. It was drizzling, we hoped it would go away, but it just came down. It has affected the attendance definitely, but the performances have gone on. But the week has been great."

"The opening concert at the Courtleigh Auditorium, the jazz brunch on Sunday at Hotel Four Season; at Glenn's Jazz Club last night (in Tower Isle on Saturday). Ba-Boom was on stage last night and a lot of people came out to hear them. Jamaicans love them and they love Jamaica. They've been playing ska and reggae, that's what they mostly play," said Hague.

Indeed, Ba-Boom ended the show on a high despite the rain, the group's fusion of reggae, ska, jazz and samba getting the small gathering moving.

Lead vocalist Bruno Buia encouraged the crowd to continue the struggle our ancestors started before reeling off a DJ piece, We Nuh Waa Nuh Babylon.

Hague did a cameo performance with Ba-Boom, delivering I'm in the Mood for Love. But in a climactic end, the Jamaican musicians joined Ba-Boom on stage to deliver Bob Marley's Fly Away Home, with Grub Cooper leading the vocals.

Buia was excited about performing in Jamaica and wants to return next year.

"It's my first time in Jamaica ... first time I leave my country, and first time the group Ba-Boom leaves Brazil," Buia told The Gleaner.

"It has been marvellous, for us it's a great honour to be in Jamaica because Jamaica is the land of most of our inspiration and the base of our music is Jamaican music. So it's a big connection. In Brazil, we play this kind of music, we mix Jamaican music with some jazz element, Brazil rhythms and hip hop; basically Brazil-Jamaica."

Jimmy Cliff is the most popular Jamaican artiste in Brazil, Buia said. He added: "And Bob Marley of course, and Damian Marley, Gladiators, Israel Vibration, Toots, Skatalites ... we play their music. They are our references."