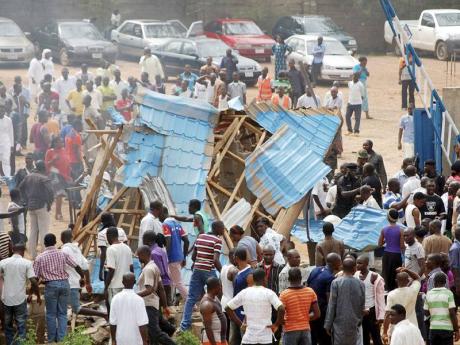 People gather outside a church following a blast in Kaduna, Nigeria, on Sunday. Three church blasts rocked a northern Nigerian state Sunday, officials said, prompting protests in a state that has previously been strained by religious tensions. - ap

A curfew in a religious flashpoint state in Nigeria's north has failed to stop days of ongoing violence and almost 100 deaths, an official said yesterday, as residents of another besieged city said a curfew imposed there has left them trapped at home.

A rescue services official said more than 98 people have died since Sunday after a trio of church bombings sparked reprisals in Kaduna state. He spoke on condition of anonymity because he was not authorised to speak to journalists.

A radical sect known as Boko Haram has claimed responsibility for attacks on churches in the cities of Zaria and Kaduna, setting off violence that eclipsed the original attacks.

The reprisals in the Nigerian flashpoint state highlight festering religious tensions in the West African nation of more than 160 million people. Kaduna sits at the border between the country's predominantly Muslim north and its mainly Christian south. A history of attacks and counterattacks between the two communities there means that authorities are often cautious about releasing death figures.

Officials initially said 21 people were killed in Sunday morning's blasts, but now say the death toll has jumped to 98, including reprisal killings. They refused to give a breakdown clarifying who died in the initial blasts and who was killed in reprisals.

As news of the church attacks filtered through the city Sunday morning, young Christians took to the streets in violent protest. An AP reporter saw smoke billowing over a mosque in a predominantly Christian part of the city.