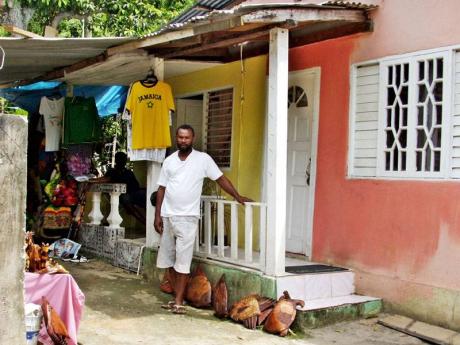 Steve stands before his house in Harrison Town, St Ann, which was flooded in 2010. - Photo by Carl Gilchrist

Any flooding of Ocho Rios in St Ann means that Harrison Town, situated above the town, heading towards Fern Gully, would have been affected. And, approaching three weeks into the 2012 hurricane season, residents are worried.

Bar operator Monica Collins remembers the last time she was flooded out. It was the morning she was scheduled to fly out of Jamaica. She had to wade through mud with her suitcase to get a taxi.

"I lost things here. My furniture get damaged. My clothes got destroyed. It affected everything - my house, my business, everything got damaged, everything," said Collins.

According to her, flooding has become a regular thing in the community.

"We always have flooding here, so we kinda get used to it," she said. But still, she hoped for the best: "I hope that it doesn't happen again. I hope we don't have another flood like that one."

She was asked about the work being done in Fern Gully area.

Another resident, Panna Green, said he was concerned.

Green told The Gleaner about the last time the community experienced a severe flood.

"Year before last (2010), great flooding, whole heap a water cover all the door. Everything inna the house get damage and wet up and stuff like dat. A regular ting. Anytime it touch dem time a year, we can look out fi it (flooding)."

He believes the current work being carried out on the Fern Gully will help but not entirely. But he has a warning.

"It will help in some sense, but how dem do the gully, dem only a channel the water fi mash up the town (Ocho Rios) even more. Whosoever get the contract never come and contact somebody who live inna the area who could a show dem what and what. The river name Nuh Have No Mercy. When water a come dung, all some stone big like bus and car yuh see a run come dung inna the water! It do help a likkle way, but a pure short cut dem a tek wid government money."

Another resident, a craft vendor who gave his name as Steve, said he suffered greatly during that flood. He, too, said he was concerned about the potential for flooding during the hurricane season.

"Yes, man, mi concerned. It can happen anytime now. Is a riverbed. As a matter of fact, anytime dem start work pon the road, we always have a flood; seriously."

It had rained all day and according to Steve, when he opened his door: "Mi see water about six feet tall come round di corner, lick the garage and by the time mi say to mi babymother, 'Yuh know say di house doh flood out?', the whole house flood."

He lost all his furniture and his craft items that were in his shop in Fern Gully.

"Yuh see all the next mawning. Mud deh a yuh knee. Mi nah talk bout water, mud! The whole house, from back to front, pure mud," he recalled.

He, too, is unsure if the current Fern Gully rehabilitation will solve the situation.