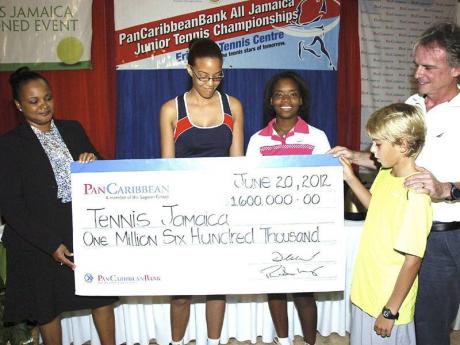 PanCaribbeanBank reaffirmed their sponsorship of the All-Jamaica Junior Championships when they handed over a cheque worth $1.6 million to Tennis Jamaica yesterday.

Tamara Waul-Douglas, manager of the business priority unit, PanCaribbean, which is sponsoring the tournament for the seventh consecutive year, presented her company's cheque to Tennis Jamaica president John Bailey during a press launch at The Jamaica Pegasus hotel in Kingston yesterday.

"PanCaribbeanBank is elated to be associated with this exciting tournament, because we are well aware of the important correlation between sports and the emotional development of our youth," said Waul-Douglas.

"The sporting arena continues to be of high importance for the Sagicor and PanCaribbean team as we endeavour to impact the development of the children of Jamaica," she said.

Waul-Douglas added: "Over the years, the All-Jamaica Junior Championships has been used by many of Jamaica's leading tennis junior players as a vehicle to help prepare them to win tennis scholarships to universities in the United States."

Bailey said he was very delighted for the sponsorship and support from corporate Jamaica in helping with the development of the country's junior tennis players.

"PanCaribbean is one of our most committed partners in providing opportunities for our junior talent here in Jamaica," said Bailey.

"Tennis Jamaica views this PanCaribbean All-Jamaica Tournament as the top local junior tennis tournament, and encourages all juniors who want to secure their national rankings and represent Jamaica internationally to participate in it," Bailey said.

He added: "We expect a high level of play. We have some young, fantastic juniors coming up and we are looking forward to their competitive exposure here in Jamaica, because many of them go away to play overseas."

The tournament will also serve to prepare top juniors for Tennis Jamaica's annual international junior event, the International Tennis Federation (ITF) Jamaica Junior Championships, which will be held at the same venue from July 17-24.

This tournament will feature competitors from all over the world and it gives Jamaica's top Under-18 players the opportunity to gain ITF junior world-ranking points.