Heat one win from NBA title 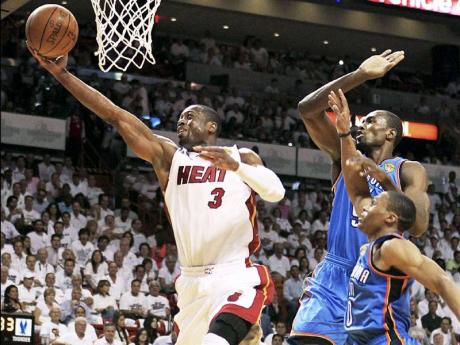 Miami Heat's Dwyane Wade goes to the basket past Oklahoma City Thunder's Serge Ibaka (rear right) and Russell Westbrook during the third quarter of Game Four of the NBA Finals at American Airlines Arena in Miami on Tuesday. - AP

The pain was so great, LeBron James said, that his body practically shut down on him.

He could hardly stand, certainly couldn't run. Good thing all he needed to do was shoot.

A limping, grimacing James shook off the pain of left leg cramps to hit a tiebreaking three-pointer with 2:51 remaining and the Miami Heat held off the Oklahoma City Thunder for a 104-98 victory on Tuesday night and a 3-1 lead in the NBA Finals that no team has ever blown.

"He was hurting," teammate Dwyane Wade said. "But that's what it's about this time of the year. It would hurt more if we lose the ball game, so it feels a little better if you can win it."

Imagine how good it will feel if the Heat get one more victory.

Better get well fast, LeBron. You're one win from the biggest party of your life.

Game Five is tonight and James will have a chance to finish a nine-year chase that started in Cleveland before he famously - or infamously - left for South Florida before last season.

"Of course, it's there to think about," said James, making it clear he plans to play. "I'll be ready for Game Five."

With James watching the final moments, Mario Chalmers finished off a stellar 25-point effort that matched Wade. James had 26 points, 12 assists and nine rebounds, missing a shot at a triple-double only because he was on the bench at the end after the thigh cramps emerged following a fall near the Thunder basket.

The Heat needed all James could give and more to hold off Russell Westbrook. He scored 43 points for the Thunder, who wasted an early 17-point lead, but were never out of the game because of their sensational point guard. Kevin Durant had 28 points, but James Harden threw in another clunker, finishing with eight points on 2-of-10 shooting. Westbrook and Durant were the only Thunder players to score in the last 16:46.

"Shots were falling," said Westbrook, who was 20 of 32. "It really doesn't mean nothing. We didn't come out with the win."