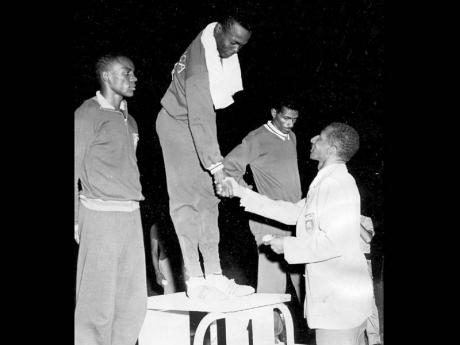 RECORD BREAKERS: George Kerr receives his gold medal from Herb McKenley, former quarter-mile great, after he had clocked a record 45.9 to win the 400 metres at the Central American and Caribbean Games at the National Stadium in 1962. Left is second-place Venezuelan Horacio Fusil and right, Jamaica's Mal Spence who was third. 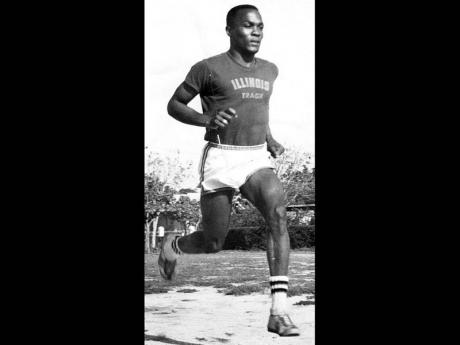 FIFTY years ago when Jamaica inaugurated the National Stadium with the staging of the Central American and Caribbean (CAC) Games in the week after Independence, George Kerr was the hero. He was the first Jamaican winner, inside that venerable structure, and it marked the midpoint of the most successful period of a fine career.

Educator Ben Francis was the first to see Kerr's huge athletic potential. Kerr's brother had been picked up for a sporting engagement and, as the Knockalva Training Centre team vehicle pulled away, young Kerr set off in pursuit. His swift and enduring pursuit impressed Francis, who, as a trained physical education teacher, knew talent when he saw it.

The rest is history. Francis took the youngster under his wing at Knockalva and, with the help of Herb McKenley, George made his way to the University of Illinois. He blossomed there. Two National Collegiate Athletic Association (NCAA) titles later, he went to the 1960 Olympics and won the bronze medal in the 800m.

He and Arthur Wint are the only Jamaicans to win Olympic medals in the 800 and, until Kenia Sinclair did it in 2008, they were the only ones to even reach the final.

He narrowly missed a medal in the longer event in 1964.

He was so good at the 400 that he might well be among the best Jamaicans of all time in that event. He was the first Jamaican to win the 400 at both the Pan American and Commonwealth Games.

Those performances led the United States publication Track and Field News to include him in its annual Top 10 rankings for the 400 metres on four occasions. He was world number two in 1959, number three in 1962, number six in 1960 and number eight in 1961.

Twenty years later, Bert Cameron equalled his 1962 Commonwealth title. The only other Jamaican winner of that title is Michael Blackwood in 2002. It took 40 years before Greg Haughton matched his 1959 Pan-Am win in 1999.

Ever the patriot, Kerr delayed his retirement from the sport to run at the 1966 Commonwealth Games in Kingston. He was rewarded with a bronze medal in the 800m.

He died last week and while Jamaica mourns this quiet man, his legacy lives on. His best college times - 45.98 and 1.46.40 - are still on the all-time Illinois Top 10, even though he ran them in 1960. That's eight years before synthetic tracks became mainstream at the 1968 Olympics.

Kerr took over from Wint as national record holder and, even now, at 1.45.8, he is the sixth fastest Jamaican of all time. In the 400m, his best time of 45.7 tied Herb McKenley's national record in 1960. They held the mark jointly until Bert Cameron began to rule in the early 1980s.

That's how good he was. Since his time, only Clive Terrelonge with his 1993 World Indoor win has had any real international success in the 800m, and only Byron Dyce and Anetia Denton have joined him as National Collegiate Athletics Association champions.

With their 400m speed, Wint and Kerr should perhaps be the template for progress in the two-lap event.

That's a thought for some other juncture on the road from Daegu to London. Right now, even before we've recovered from the recent passing of Kerr's Olympic teammate, Keith Gardner, it's time to reflect.

So good was he at both 400 and 800 metres, that George Kerr, the Independence hero, is certainly one of the best Jamaican athletes of all time. Combining those events at the world level is so tough that only Cuba's 1976 double Olympic champion, Alberto Juantorena, and Wint, have done better. His departure leaves a long shadow.