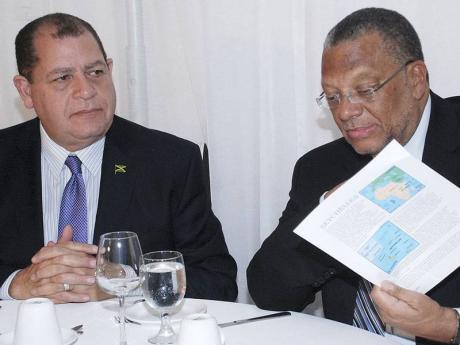 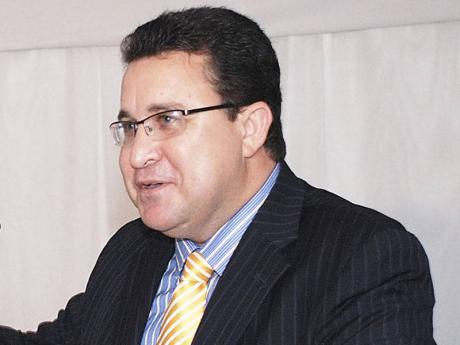 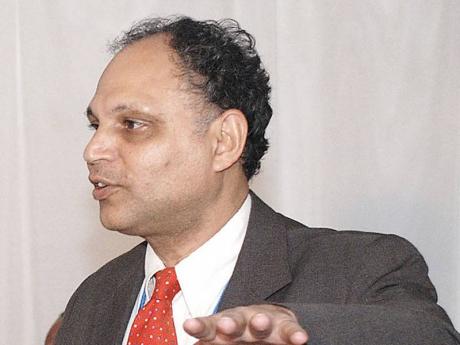 In this photo published on Friday, financial secretary for the Ministry of Finance and Economic Development, Mauritius was incorrectly identified as the finance minister. We regret the error.

The finance minister and financial secretary of two African nations, Seychelles and Mauritius, which have moved from austerity to robust growth within the past few years, have suggested that Jamaica's implementation of fiscal reform measures was fundamental to a return to economic growth.

Both countries have experienced anaemic growth rates and high public debt not dissimilar to Jamaica, but having implemented fiscal and other reforms along the trajectory outlined by Jamaica's Finance and Planning Minister Dr Peter Phillips recently, they now experience annual economic expansion of up to five per cent.

The reform measures implemented by Seychelles and Mauritius were carved out in collaboration with the International Monetary Fund (IMF) and other multilateral institutions.

However, "it doesn't matter if we have the IMF or not, what matters is that we have the right policies in place and to maintain those policies going forward," according to Pierre Laporte, Seychelles' minister of finance, trade and investment.

"The point is that it is always very, very difficult to do this kind of reform and austerity measures, but at the end of the day we had no choice, and one of the lessons learnt is that the longer we waited the more hurtful it was in the end," he added.

"In the experience of Seychelles, the longer we waited the more it hurt," said Laporte, speaking at a roundtable discussion organised by the Caribbean Policy Research Institute (CaPRI) and the World Bank at the Spanish Court Hotel, New Kingston on Wednesday.

Laporte explained that like Jamaica and other Caribbean countries dealing with growth challenges, Seychelles - an island country spanning an archipelago of 115 islands in the Indian Ocean, some 1,500 kilometres east of mainland Africa and northeast of Madagascar - was at that point in 2008 but is now realising growth rates of between three per cent and four per cent.

But Laporte said that was achieved by implementing 'very drastic reforms'.

"In 2008, Seychelles stood at a crossroads facing a situation where the country was suffering from severe macroeconomic imbalances and severe structural constraints that resulted from many years of a centrally planned economy," said the finance minister.

"When the political situation in the country opened up in 1991 that was the time when the country should have adjusted," said Laporte, referring to the country's return to democracy following a coup d'etat in 1977 and a 1979 constitution declaring the Seychelles a socialist one-party state, which lasted until 1991.

"Instead, in order to maintain welfare standards, the authorities decided to monetise the system and run a deficit to keep the country going," he said. By 1998, the country adopted a fixed foreign exchange rate regime and introduced monetary controls "and then ran out of reserves," he added.

"In 2008, the country was not able to pay and had to default on (its) debt. In the case of Seychelles, we defaulted by virtue of not having any money to pay. It was that bad, believe me it was that bad in 2008," said the finance minister.

"We had the debt crisis and at the same time the world economy entered into recession, so we had to call in the IMF (and) with the support of the World Bank and other donors began to devise a programme to address the issues," Laporte said.

Following the reform measures and with the support of multilateral agencies, Seychelles, an island of 90,000 people, now enjoys a per capita income of US$14,000.

"We are confident that we will maintain the position we are now in," said Laporte.

The first step in the reform process, he explained, was a liberalisation of the country's monetary system by floating the exchange rate and removing all exchange controls.

Second, he said, they implemented tight fiscal policies which were supported by structural reforms in tax administration.

The third pillar involved further structural reforms such as eliminating subsidies and reducing the public-sector workforce by 15 per cent.

"Once the programme was in place, we had to deal with the debt issue. We fought hard and got a 45 per cent haircut on the external debt, which applied to bondholders and other private creditors," said Laporte.

"It took us about two years to go through the process," he said, adding that "they were very, very tough measures and, as of today, we continue because the good thing with the reform is that the results were achieved."

As a result of the reform measures, the country has managed to run primary surpluses year-over-year, hitting a record level of 14 per cent in 2009, the highest in a non-oil producing country, Laporte said.

In 2010, he said, the primary surplus was at seven per cent, and at 4.5 per cent within the last year. Still, the country expects to face challenges due to the recession in Europe, its main tourism market, and as such had to revise growth projections downward from four per cent to three per cent.

During the reform process, inflation was brought down to two per cent and is now close to zero.

Mauritius, a neighbouring island to Seychelles, also faced a similar situation in 2006 when its economy went into decline, forcing it to take corrective measures.

"In 2006, we were going the way that Seychelles was going," revealed Ali Michael Mansoor, financial secretary in the ministry of finance and economic development, Mauritius.

Debt has been rising for 10-15 years and reached 70 per cent of GDP, he said, adding that economic growth, which averaged about five per cent to six per cent for a long time, declined to two per cent.

"But in Mauritius we were very fortunate that the newly elected government with a minister of finance that was determined to bring wholesale reform, and a prime minister willing to give him strong backing, decided that if you have to do anything you have to do it in the first year. Any measure too politically demanding is unlikely to be done later, so it's not now or later, it's now or never," Mansoor told the forum.

The financial secretary said the poor economic situation was compounded by the country losing 30 per cent of its jobs as a consequence of the expiration of a multi-fibre arrangement, a world trade agreement governing trade in textiles and garments, and with it 25 per cent of its main output, textile.

In addition, there was the country loss of preferential access to the European Union where all its sugar was sold, and at the same time was faced with rising commodity prices, particularly petroleum and food, almost all of which the country imported.

Last year, Mauritius, which has a population of about 1.3 million, saw GDP growth of 4.2 per cent, while inflation stood at five per cent.

According to Mansoor, "As in the case of Seychelles, the reform should have come 10 years earlier."

Mauritius' reform measures included the imposition of a flat income tax of 15 per cent, removal of the discretionary power of the minister of finance to grant waivers, broadening of the tax base and improved tax administration.

In terms of curbing public expenditure, a programme-based budget was implemented for government ministries and agencies, where they had to justify the need for any new money.

A debt-management programme was also established, in addition to labour-market reform with rapid job creation and an aggressive move to improve the business climate to attract foreign capital, skills, talents, expertise and ideas.

According to Mansoor, an important part of the reform process was a widening of the safety net.

Consequently, a national empowerment fund targeting the highly vulnerable was implemented, along with training programmes in literacy and numeracy, a special programme for re-training unemployed women, in addition to the establishment of an integrated social development housing programme.

Within 12 to 18 months of implementation, Mansoor said, the reform measures bore fruits with growth increasing to between five per cent and six per cent, and unemployment decreasing from nine per cent to 7.5 per cent.

"You can understand that the best alternative to austerity is unlocking growth, but growth does not happen by saying so; we need to have real measures," he said.

Jamaica has embarked on reform programmes aimed at enhancing its fiscal responsibility framework. Among the key areas are: