'Water Party' goes to the beach 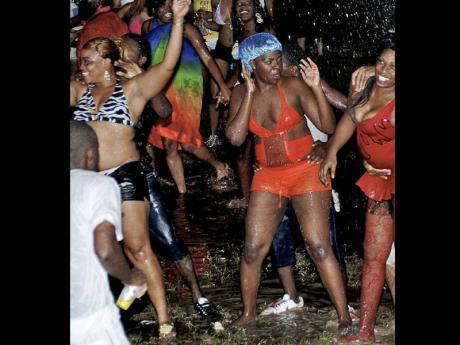 The water party atmosphere will move to the beach. - File

The highly anticipated Appleton Water Party (The Official and Original) returns for another staging after its last blowout fête brought thousands of patrons to the New Kingston Golf Club.

This time around the event, presented by Island Mas Jamaica in association with WATA, will see its Beach Edition ignite the sands of the Fort Clarence Beach in Portmore, St Catherine, tomorrow.

The mixed drinks inclusive event is scheduled to be held from 3 p.m. to 1 a.m. and promises to once again provide the high-energy vibe that it has become known for. Patrons will be treated to the wettest, most exhilarating beach party as Renaissance, Chris Dymond, Richie Ras, DJ Narity and DJ Billy will all play their part in enhancing the party experience by delivering solid sets of the best music from a variety of genres.

The Official and Original Water Party has grown from being held annually to being staged up to three times a year. This year, the event is a part of the Negril's premier Appleton Temptation Isle (ATI) weekend, and this staging is recognised an an official ATI lead-up event where patrons will be given the chance to win ATI season bands.

There is much anticipation leading up to the Beach Edition, as patrons await the excitement of being doused with water on the beach, while fist-pumping and dancing to their favourite musical selections with their beverage of choice in hand.

The Appleton-ponsored event will feature over 200 feet of bar space.

Appleton Estate's brand manager, Cecil Smith, said that the Official and Original Water Party is one of the biggest events to hit Kingston in recent years, and with it now heading to the Sunshine City of Portmore, the move was one that they had to follow all the way.

"Water Party has never disappointed patrons when it comes to providing solid, quality entertainment. It's one of the events that thousands of people mark on their calendars as a must-attend - and with that Appleton must attend. We will be there at Fort Clarence Beach, Portmore, amplifying the experience and bringing the hottest mixes to the masses, as Appleton is renowned for doing," said Smith.

The event also maintains its strong partnership with WATA, a move that proves to be important in keeping patrons hydrated and energised amid all the dancing and partying.

Other sponsors for the event include Boom, Lucozade, Zip FM, FAME FM and Sun City FM.

With admission costing $1,000 presold, $1,500 at the gate and a ladies two-for-one special running all night, the promoters promise patrons another wonderful Water Party experience. "For starters, we have chosen a very secure beach venue where patrons can come and have a wonderful time. The venue is also larger and I guarantee that like the last Water Party staging, this one is going to be absolutely fantastic. Those who were in attendance can attest to that, and we're doing it even bigger this time around," said promoter Andrew Bellamy.

With attractions such as water trucks and body painting to be present at the event, it seems that the party has already hit home with partygoers, as it's Facebook page already has thousands confirmed to attend.