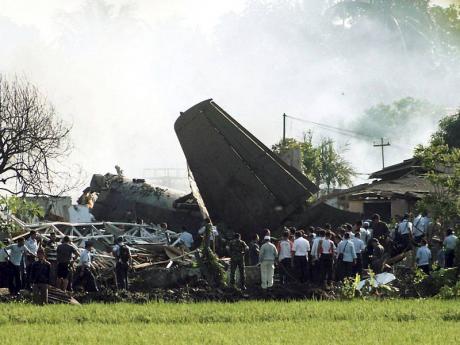 An Indonesian air force plane slammed into a military housing complex and ignited a huge fireball yesterday while trying to land in Jakarta, killing all seven people aboard, as well as two toddlers and their nanny in a home.

The pilot, co-pilot, and five trainees aboard the Fokker F-27 were on a routine training flight when it crashed into houses in a neighbourhood about 1.5 kilometres (nearly a mile) from the runway where it was trying to land, Indonesian military spokesmen said.

Raging orange flames jumped several metres into the air and a huge column of black smoke billowed over the eight homes damaged in the crash in eastern Jakarta.

Twelve people were injured, two of them critically.

"I could hardly believe my eyes. There was a military plane that crashed and hit the houses!" said Hendra, a resident of the air force complex who goes by only one name. "At once, the situation turned into chaos. All the residents fled in panic. Women and children were screaming hysterically."

He said he helped at least five injured people, mostly with burns, to a nearby air force hospital.