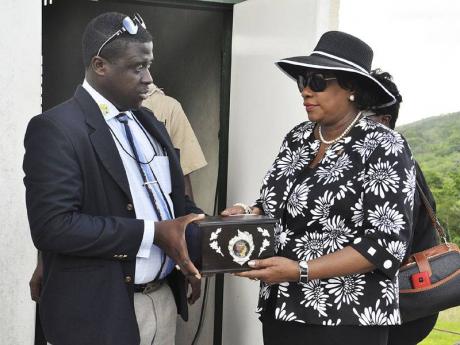 Marlene Coudray is not about to question God's wisdom. Instead the mother of the late Michelle Coudray-Greaves has found comfort in her faith.

"God knows best. He knows our heart and we are not supposed to question God in His wisdom," said Coudray, adding that she would continue to take her daughter's death one day at a time, admitting it was a difficult time for the family.

Dressed in black and white, the sombre-looking mother, speaking in tones hardly louder than a whisper during the thanksgiving service for her daughter Michelle Coudray-Greaves, waited patiently for the urn bearing the remains of her beloved child.

Michelle Coudray-Greaves went missing on June 1. A body later identified to be hers was found burnt in a cane field in St James.

Marlene Coudray, mayor of San Fernando, Trinidad, accompanied by her common-law husband, Lawrence Achong, and Trinidad and Tobago's high commissioner to Jamaica, Dr Iva Gloudon, mustered up enough strength to participate in the moving two-hour ceremony attended by an intimate group of friends and family members at the Dovecot of St James Crematorium.

Comforted by the fact her daughter had not disappeared without a trace, Coudray said: "Finding her remains has brought closure. There are those who have lost their loved ones and never found them."

Still overwhelmed by the outpouring of love during her time of grief, the San Fernando mayor said the tributes from her daughter's former colleagues at Air Jamaica and Cornwall College brought a sense of comfort.

"We felt she was happy, because here is where she wanted to be."

Speaking glowingly of the Jamaican police, Coudray said that in her political life she had heard negative things about the security forces, but has been blown away by their professionalism.

"I am happy that we came to Jamaica. First, I wanted to see what Michelle experienced here and I saw first-hand the kind of support given to our family. I am thankful to the Government, to the prime minister, and everyone, including the man on the streets."

Trinidad's high commissioner to Jamaica, Dr Iva Gloudon, who contributed a song, reiterated her government's commitment to Jamaica, stating clearly that Coudray-Greaves' death would not affect the relationship between the two countries.

An official funeral for Michelle Coudray-Greaves will take place in San Fernando, Trinidad and Tobago, this Saturday.