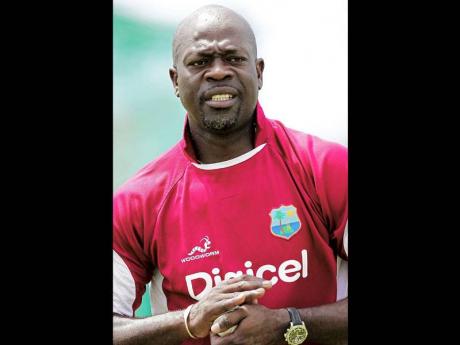 Ottis Gibson ... at a loss to explain why his side had not lived up to expectations. - file

As West Indies geared up for today's final one-day international (ODI) of the three-match series, head coach Ottis Gibson admitted that he was at a loss to explain why his side had not lived up to expectations.

The star-studded Caribbean side entered the three-match series battling to stave off the tag of favourites but have been far from their best in the first two matches, losing both by comprehensive margins.

"At the end of the day, we're playing cricket in England against a very good English side.

"We keep saying, on paper, we have the makings of a great side with Chris (Gayle) coming back, (along with) Dwayne Bravo and Kieron Pollard, with the form those guys had in the IPL," Gibson told a media conference yesterday.

"But it's difficult to put into words how things shaped up so far in the series. We've shown that we can play, but England have just been that little step ahead of us all the time."

He continued: "(Ian) Bell is in great form; (Alastair) Cook has made a lot of runs in one-day cricket recently. We got Cook in the first game (cheaply) and we couldn't get Bell; then we got Bell (in the second game) but couldn't get Cook, so we've been just a little bit off the pace."

Bell scored a dazzling 126 from 117 balls in the first game at the Rose Bowl as the Windies collapsed to a 114-run loss last Saturday, and Cook carved out 112 at the Oval on Tuesday to send the tourists tumbling to an eight-wicket defeat.

Despite the return of limited-overs stars like Gayle, Pollard and Lendl Simmons, the Windies' batting has struggled, falling for 172 in the first ODI and managing an inadequate 238 in the second match.

Their bowling has also struggled to contain England, with mystery off-spinner Sunil Narine largely ineffective in the conditions, taking a single wicket from 20 expensive overs.

Gibson said, however, he was not disappointed with the 24-year-old who he said was still finding his way in international cricket.

"I'm not disappointed. A lot was made of him obviously (because of) his exploits in the IPL and even the way he bowled against Australia in the Caribbean on turning pitches," Gibson explained.

"The pitches haven't turned here but we've tried to manage the amount of expectation that we place on people like him who are now starting out their international careers. So disappointed? Not really. He's not taken 'five-fers' and stuff like that but he's been okay.

"It's been the start of his international career, first time bowling in England on pitches that aren't turning. If you look at it, (Graeme) Swann's been tidy but hasn't bowled us out really, and if you look at Swann over the whole summer it's been the same.

"People would say that Swann isn't bowling well but the pitches haven't been massive turning pitches."

West Indies will now attempt to avoid a series whitewash and salvage some pride by winning today's encounter.

All-rounder André Russell, who missed Tuesday's game with a shoulder injury, has recovered and is available for selection.

The Windies were restricted to an indoor training session yesterday after heavy rain ensured that covers remain on the ground throughout the day.

More rain has been forecast for Friday.