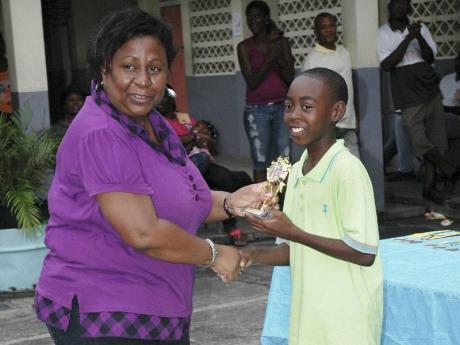 Sitting to the sides of the concrete quadrangle of the Ewarton Primary School in St Catherine are 160 children, some parents and onlookers preparing to witness a high-drama blitz play-off to determine the champion of the inaugural Ewarton Primary Championships.

The play-off is between Tahj Grannel from Ewarton Primary and Javony Green from Jericho Primary in St Catherine, who were deadlocked on six points from six games in the Under-12 Open section of the tournament.

The table arrives placed in the cleared centre concrete space. The air is pregnant with expectation as most people here have never witnessed the excitement of a sudden-death blitz play-off in chess. The tournament director prepares the table and that decisive clock as the young chess gladiators take their seats.

The sudden death blitz in chess pits skill against skill under the axe of a ticking clock, and the truth of the saying that time does not stand still is immortalised. Each person gets five minutes to complete an entire game. The outcome is unforgiving, you can win on the board or win on the clock, but, by design, a result is ensured.

Grannel from Ewarton Primary School and Green from Jericho Primary are the two chess warriors for this contender-like drama, minus the physical contact. They will play three blitz matches in this space to decide who will be crowned the first Ewarton Primary Chess champion.

Grannel is home. Green is really not that far from home as both players are from St Catherine. The two know each other and have competed in tournaments before. Both are coached by NM Mikhail Solomon and, when asked who he thought would win, he said: "I thought Tahj would have won, though I know Green is full of surprises."

The game begins and the swift moving hands of the two 12-year-old junior chess enthusiasts have the crowd mesmerised, the hands and fingers moving from clock to pieces with such speed that those unfamiliar with the game are often unsure whose turn it is to play.

Match one: Grannel gets the spoils and goes into match 2 needing just one victory to claim the title. But Green, just as his coach has said, is no pushover, which is why he, like Green ended the tournament with a perfect score of six points from six games. He pulls back game two and the score is one all.

It is only fitting for the sudden-death blitz to go down to game three. And it is blistering. Grannel holds his wits and captures game three and the title of the Ewarton Junior Championships.

Blitz play-offs are quite standard in chess now where organisers define that they need a single champion. The 2012 World Championships last month was decided finally on a blitz play-off.

Other winners from the Ewarton Championships were:

Under-12 Junior Bennett third, behind Green second and Grannel, first. A six-way tie in the boys Under-10 between Tajae Smith, Alkensna Foster, Lantae Walker, Jordan McKoy, Gavane Dyer and Craig Miller. First place with a perfect score in the all-girls section was Shwanalee Gordon.

July 7 and 8: The St Jago Chess Open 2012 at the St Jago High School, details and registration on website chess.stjago.com.