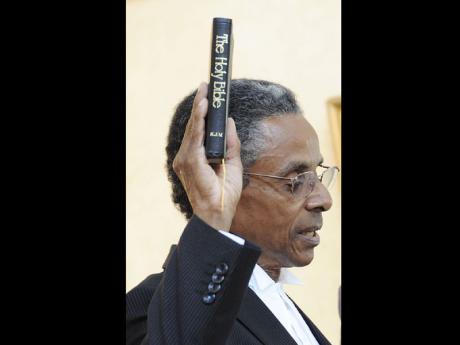 AG pension embarrassment must not recur

It was an about-turn which was expected by political watchers. After all, the revelation which initially emanated from the well-researched chambers of the attorney general sent seismic shock waves throughout the parliamentary committee which was tasked with re-evaluating possible pension reform.

It was a tense day as the attorney general himself, Mr Patrick Atkinson, appeared before the committee to right the wrong which was committed when his office sent a document advising the committee that any legislative changes to workers' pensions would be in violation of the Jamaican Constitution.

This particular piece of advisement was enough to effectively halt the committee in its footsteps and in so doing frustrate the pension-reform process. Notwithstanding the subsequent correction made by the AG, it is unacceptable by any standard for there to exist such a grave disconnect between the political directorate, in this instance the AG, and the administrative cluster of lawyers which constitutes his chambers.

The reality is that such a gulf in communication could have resulted in much more harm to the legislative and/or judicial life of the country. Such a genuine gap must be plugged before further damage is resulted.

The most bewildering aspect of this whole affair perhaps seems to be the revelation by Mr Atkinson that he was at a complete loss as to any such document bearing that particular kind of advisement. This highlights, most of all, the urgent need for the reconstruction of a bridge of sorts to serve as a safe and reliable conduit for effective communication between the respective structures throughout the AG's Chambers.

If this is done, it may well aid in avoiding future events of this sort, as well as the accompanying embarrassment.