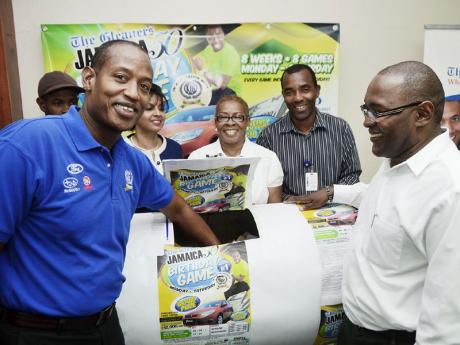 There has been an overwhelming response to The Gleaner's Jamaica 50 Birthday Game.

The game, which was officially launched yesterday at the company's North Street offices, offers weekly prizes of $10,000; and a grand draw with a first prize of a 2012 Ford Focus sedan from Kingston Industrial Garage and a second prize of $50,000.

"I need to win that car, so I'm looking forward to receiving it when I do," laughed Lewis.

think it's my time

A talkative Gordon-Somers said she was feeling lucky.

"When I saw this thing in the paper, I said 'wow'. I'm not really a gambler but I think this is my time." Lee said he had already sent out multiple entries.

"I decided to try my luck. It's not often that I enter a competition," he said. Business development and marketing manager at The Gleaner, Karin Cooper, noted that a similar game was done in 2002 and it seemed a good idea to revive it for Jamaica 50.

"The response has been overwhelming. We've really had a lot of people coming in with their entries; the boxes (at the office) have been filled to capacity."

The competition will last for eight weeks, with the grand draw taking place on August 10.

Check The Gleaner and The STAR for game rules.