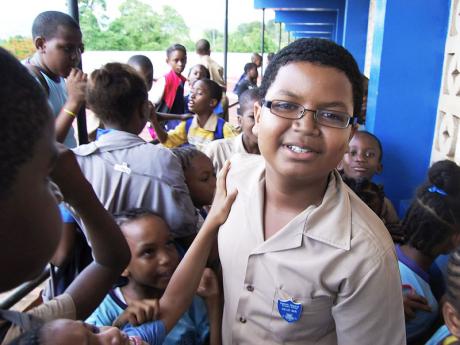 Nicholas Ebanks, along with his schoolmates, shortly after he got his Grade Six Achievement Test results. -PHOTO BY DAVE LINDO

The Gleaner has been following six students in the rural area since last October as they prepare for the Grade Six Achievement Test. Today, we close the feature with their results and reactions.

MANDEVILLE, Manchester:NICHOLAS EBANKS of McIntosh Primary School in Manchester is on top of the world after he was placed at deCarteret College (DC) based on his scores in the Grade Six Achievement Test.

The Gleaner was on spot as Nicholas got the good news from his teacher, Lisean Gordon.

On hearing his results, his face lit up instantly and in a split second, he ran off in jubilation after being told that he passed for DC.

For Nicholas, it was mission accomplished. "I feel overwhelmed with joy, words can't explain it. I have really worked hard and it has paid off, so I am happy," he said with a broad smile.

Gordon was not surprised by Nicholas' performance. "I think he has done very, very well. I am proud of him," she said. "I know he put out his best, as well as all my other students."

Nicholas' father, Mervin Ebanks, was just as happy for him. "He has really worked hard. I had no doubt that he would have done well. I am really proud of him," Ebanks said.

Nicholas scored 97 in mathematics, 98 in science, 98 in social studies, 97 in language arts and 11 out of 12 in communication task.