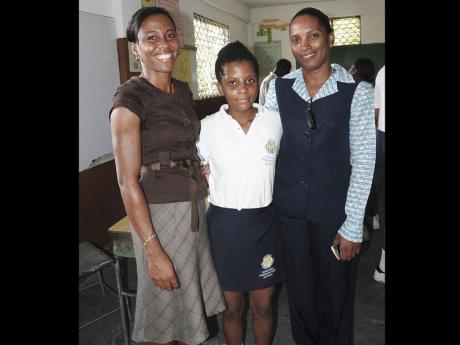 WESTERN BUREAU:NO GOVERNMENT scholarship, no problem for 10-year-old Aaliyah Cookhorn of Hosanna Preparatory School in Montego Bay as she was placed in the school of her choice, which was enough to keep her excited, and her parents happy.

Eager to take on the new challenges at Montego Bay High School for Girls with some of her friends who will also attend that institution come September, Aaliyah quipped, "I am looking forward to every moment of high school."

It was not difficult to notice the carnival-like atmosphere of celebration at the prep school as students celebrated with parents, teachers and their friends following the announcement of the Grade Six Achievement Test (GSAT) results on Wednesday.

For months, The Gleaner had been tracking the GSAT journey of Aaliyah who struggled with mathematics, but conquered the subject about two months heading into the exam. She scored 94 in mathematics, 90 in science, 93 in social studies, 84 in language arts and 92 in communication task.

"Although I didn't get the government scholarship, I still feel very satisfied with the work I did and making sure I made myself and parents proud," she noted.

"I am proud of Aaliyah and the results. Considering she was very sick heading into the exam, she has really done well. The night before GSAT, she was in the hospital and didn't come out until the day of the exams, but she showed up and got the job done so we are very proud of her," mother Cookhorn said

Teacher Shammy Dawkins, who lauded the youngster's GSAT effort, added that she will do well in the high-school system once she maintains academic discipline.

"This is just the start and she has great ability to do well. Once she remains focused and understands that hard work will be needed from her at this level, I'm sure she will do well," Dawkins added.