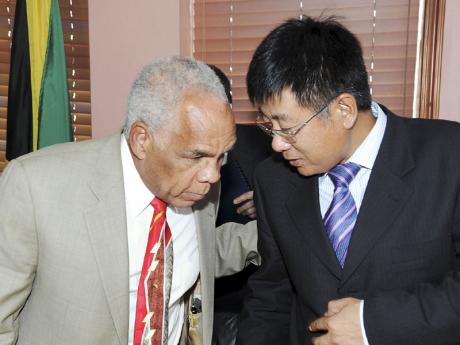 The Jamaican Government is looking to increase its collaboration with the People's Republic of China as it seeks to promote growth.

Finance Minister Dr Peter Phillips noted that in today's tight global economic context, the Asian giant is the main surplus country in the world, with reserves of US$2 trillion.

"Therefore, it will represent, for years to come, an important source of investible resources and we certainly intend to maintain not only the existing relationships ... but quite frankly we have an interest in expanding the range of companies from China that are participating in the development of the Jamaican economy," he said. Phillips was among guests at Thursday's signing of the implementation and concession agreements for the North-South Link of Highway 2000. Totally funded by China Communications Construction Company (CCCC), the link runs from Caymanas to Ocho Rios. Transport Minister Dr Omar Davies said Phillips' Budget presentation emphasised the realities the country faced.

"And one such reality is that the Government ... on our own, will not be able to provide investment capital needed to move the economy forward. What we are seeking to do deliberately... is that we utilise whatever assets we have to stimulate private-sector investments in areas that traditionally have been seen to be the province of government," he said.

menu of other projects

Phillips said there are other major projects essential for growth and said he had asked the Development Bank of Jamaica and the Planning Institute of Jamaica for a menu of major projects, outside of road construction that Jamaica can begin to attract investor interest from other countries and enterprises.

Meanwhile, Chen Zhong, senior vice-president of CCCC, said he hoped the highway link would be "just the beginning" of investment for CCCC and China Harbour Engineering Company in Jamaica, one of CCCC's subsidiaries. He promised high quality and good maintenance.

"This is the first one (project) but I believe this is not the last one. Not only for this project, CCCC and China Harbour will dedicate their energy to the development of the local ... social economy which includes the development of an adjacent area of this road. We hope Jamaica will achieve greater development in the future."