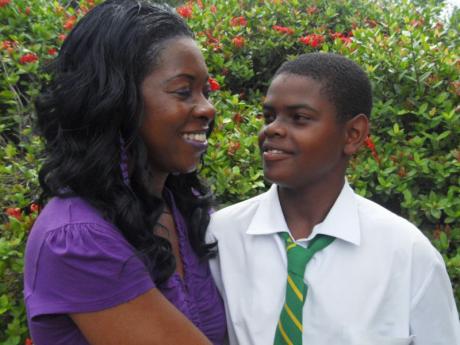 Curtis Authors and his teacher, Daphne Clarke-Grant, smile with satisfaction at his GSAT results.

Though he did not obtain an average in the 90s, as he had been working for in the Grade Six Achievement Test (GSAT), his grades were good enough to earn him a place at Kingston College, his first choice.

"I feel good. I'm very happy. That's where I want to go," the 12-year-old scholar laughed.

He scored 89 per cent for language arts, 86 for mathematics, 10 out of 12 for communication tasks, 93 for social studies and 87 for science.

"I studied very hard and gave up a lot of things like watching TV regularly, because I wanted to do well," the aspiring actuary told The Gleaner.

But the unassuming deputy head boy said he could not have achieved his feat without the assistance of his teacher, Daphne Clarke-Grant, his mother, Teisha Malcolm and grandmother, Eunella Hickson.

"Curtis has been working consistently. He has worked hard, some things that he thought he would have done poorly on, he did even better than he expected. However, although he didn't get the 90 average, he got his first choice, so I'm alright with it," Clarke-Grant said.

Overwhelmed by her only child's achievement, Malcolm beamed with pride.

"I'm overjoyed. I'm satisfied. I'm happy that he was placed at the school that he wants to go, because he really worked hard," she said proudly.

Like her son, she had high praises for Clarke-Grant for her invaluable contribution to his success.

"She is one of the best teachers. She is like a mother to him. She talks to him like I'd talk to him. Whenever anything goes wrong she calls me first and foremost. She treats him just like her own child and I'm grateful," she said smiling.

A member of the Cashew Walk Seventh-day Adventist, Curtis, who got baptised earlier this year, loves to read, play football and surf the Internet.

"I will definitely work harder at KC," he promised.