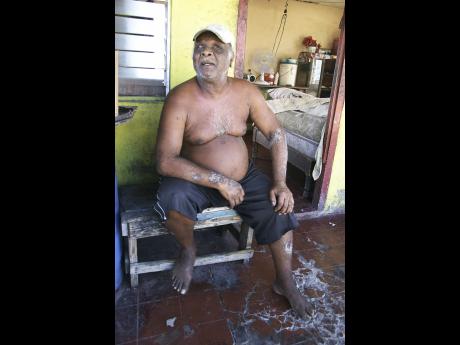 Ruel Thompson speaks about life after losing his sight.-PHOTO BY CHRISTOPHER SERJU

MITCHELL TOWN, Clarendon:LIFE HAS dealt him some harsh blows, yet Ruel Thompson's outlook remains optimistic and his sense of humour is unmatched.

The ability to laugh at himself and an easy-going attitude have helped him to cope with one tragedy after another. The blind 66-year-old lives alone at Swamp in Mitchell Town, Clarendon, and is an inspiration to all who encounter him.

Still, he manages to cook (on a coal stove), wash dishes, keep house, and generally, take care of himself, with some help from friends and neighbours. His independence, for the most part, was hampered by a lack of domestic water, a situation which improved significantly after he received a 400-gallon water tank under a rainwater harvesting project funded by the United Nations Development Programme.

The project was implemented by Caribbean Coastal Area Management under an initiative which looked at the impact of climate change and adaptable livelihoods.

Thompson was one of the beneficiaries of the demonstration project, which targeted three communities - Old Harbour Bay, St Catherine; and Mitchell Town and Salt River, Clarendon. He was unable to contain his joy: "Me so glad so till it come in like me cry when me get the tank. It will make a whole heap a difference, man, because if me get it full now, it last a long, long time. Me not going to bathe or cook with it, just drink and get the well water same way and wash plate."

Prior to receiving the tank, things were a lot harder for the former Monymusk Sugar Estate worker who started losing his sight in 1979, a situation which could have been averted, but for the lack of money. The former mechanic, who serviced the tractors and worked on cane carts and water tanks, was on his way to work one morning when "the whole place turn white".

Thompson could still see a little and after examining the eyes, a doctor determined that he was afflicted with glaucoma, a condition which was treatable, but he would have to keep up with the medication. However, having to care for his mother on reduced earnings as he was now assigned to office duties at the estate, took more than a financial toll on him. Things got worse when he was eventually let go.

He couldn't afford the medication, but through the kindness of a doctor at the Monymusk clinic, he was able to secure six packs, but once those were finished, he was unable to afford anymore. Then a cousin who lived in Kingston was able to procure some and send to him, but after a while, the pharmacy stopped stocking the medication.

By the time his mother died, Thompson was unable to source the ointment having tapped all his financial resources. Some of his former co-workers still kept in touch and would, from time to time, send him money. The death of his girlfriend in September 2010 was another blow.

The eventual loss of his sight meant depending on neighbours and friends to fetch water for him, paying $50 to carry a keg from "out a road", which would last on average about three days. Even though it didn't seem likely, life would get harder as he became afflicted with another medical condition: lesions on his hands.

A specialist in Lionel Town identified the condition, but Thompson does not recall its name. Use of an ointment prescribed by a doctor from May Pen resulted in the condition clearing up, but when the cost jumped from $1,800 to $3,000, he was forced to stop buying it.

Asked about family members who might be able to help, the former mechanic gave a light-hearted laugh before explaining that he had one daughter, but had not seen her in about five years. Still, he strives to maintain his independence, difficult as that is on the meagre National Insurance Scheme pension.

"Me have to cook for myself. Cooking nuh trouble me," he boasted, and now with his water tank, which has been set up to collect water whenever it rains, life just got a little bit easier.