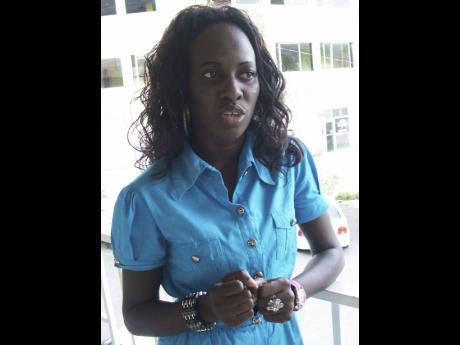 OCHO RIOS, St Ann:SHE SPEAKS with a passion that makes you believe that whatever she puts her mind to, she can achieve. After two gruesome murders that struck close to home, Susanie Lee Reid decided she would devise a peace plan to bring lasting peace to her dearly beloved Jamaica.

Already, there is a promise of endorsement by the Ministry of National Security, which has said there is no money to initiate the programme, estimated to cost around $5 million.

Reid's plan is to include the people as, she argues, it is they who are perpetrators, victims, and witnesses of crimes, so they should be central to any crime-solving effort.

She first felt the effect of crime six years ago.

Reid told her story to The Gleaner recently, minutes after ending a job interview at a hotel in St Ann. She had journeyed from her Albion Mountain home, a few miles south of Port Maria in St Mary for the interview.

"Some years ago, my brother's mother was killed. She was raped and her throat slashed. She was left by the wayside. A couple years afterwards, Aamir Scott, who was a close family friend of mine, was murdered, and that was just horrible. That was just unbelievable! I just couldn't believe something like that happened in St Mary! That was just out of this world!"

Aamir Scott went missing on September 14, 2008. His dismembered body was found in a bag in bushes two days later. He was 11 years old.

Reid explained that Scott's death motivated her to write a song. "That was what led me to the theme song, and in writing the song, I came up with the entire project. I wrote that song in about five minutes, and I cried the entire five minutes because that was just a horror story that I just didn't expect to happen in Jamaica. That was the inspiration. In any case, the inspiration to get up and do something is just to watch the news, read the papers. That's all we need to do."

The main thrust of Reid's peace plan is the establishment of peace clubs in all high and junior high schools across the island.

The peace plan comes with five main objectives: To make Jamaica a safe and peaceful country; to foster an understanding of the difference between fear and respect; to let youth know it is necessary to have an education; to obliterate the phrase 'informers must dead'; and to abide by the motto "Out of Many One People".

"My expectation is that there will be less violence in the school system. Students will start working together more as they will have a better avenue to express themselves and would be able to do so in a more positive way.

"Things that they learn they could bring it back to the community. Some of these persons, who could be bad vibes at school, would be exposed to something different, so when they go back to their communities, they could say, 'I can be a leader just the same, but it doesn't have to be in a negative way. I don't have to lead a gang, but I can lead a group.' So in that way, it will impact the communities on a whole.

"We have students in every community, and if this programme is in every high school, then it will definitely impact society on a whole."

The peace clubs would be a permanent structure in the schools and would be run by a combination of guidance counsellors, peer counsellors, and deans of discipline.

"The peace club would be a safe haven for troubled students," Reid further explained.

"It's basically an outreach group. It's like an AA (Alcoholics Anonymous), so to speak. You're an alcoholic, you can't stop (drinking) by yourself; you're a troublemaker; you can't stop by yourself. Come here, we will help you.

Reid has devised a plan to raise funds to start the programme. This includes the recording of a song she wrote, titled News Mekka, with accompanying video. Proceeds from the sale of this package would go towards funding the peace plan.

"This is where we would call upon the private sector to help in the sale of the CDs and DVDs, whether by sponsoring to fund a particular area, or purchasing the package to give to customers on customer appreciation days, or even to staff."

Students will be motivated to buy the CDs and DVDs as buyers will be entered into a 'Dream Come True' draw, with a winner coming from each school. The top three schools selling the most discs would receive special prizes.

There will also be a'Live! Don't Just Exist!' peace tour around the island.

Inspired by her parents, Huntley and Beryl Reid, Susanie has been running an outreach programme through her church, Assemblies of the First Born of God, in Albion Mountain, and saw how reaching out to youth could help change them positively.