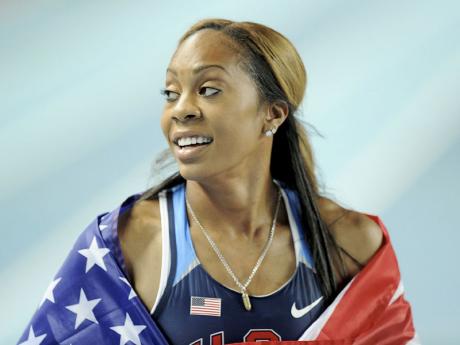 She's looking forward to moving into the place her husband, Aaron Ross, a recently signed defensive back for the Jaguars, picked out for the power couple.

Only, it won't be anytime soon.

Jamaica-born Richards-Ross has no spare time to even think about packing and relocating from her training centre in Austin, Texas. Not this close to the London Olympics and especially not now, after adding the 200-metre race to her signature event, the 400m.

With all the focus on Allyson Felix possibly attempting the 200-400 double this week at Olympics trials, Richards-Ross will instead be the sprinter going after the difficult double.

It's a lot to tackle for a runner who's still fighting a baffling illness.

Then again, Richards-Ross prefers a swift pace, whether it's on the track or in life.

"That's how my brain operates. I need a million things going on at one time so I can do one thing well," said the 27-year-old Richards-Ross, who was scheduled to run in the first round of the 400m last night.

After two injury-plagued and inconsistent seasons, Richards-Ross is rounding back into her top form again, the one that led to a 2009 world title in the 400m. That crown meant a lot to her, simply because it showed Richards-Ross she could indeed win on the biggest of stages.

Before that race, she had a résumé filled with narrow misses at major meets.

At the top of the list was her performance at the 2008 Beijing Games. She was the favourite entering the 400m, but faltered down the stretch and faded to third place.

Heartbroken, she dissolved into tears immediately after the race.

She hasn't watched many replays of that race, just enough to remember the sting of the moment.

"I can remember the feeling of crossing the finish line and being so disappointed," Richards-Ross said. "I learned a lot from that - about being patient, not just in race, but throughout the season. I'm definitely using that to prepare myself for this year. I know I have a better performance in me than in 2008."

So far, she's off to a flying start. Richards-Ross has the top time this season in the 400m when she finished in 49.39 seconds at the Prefontaine Classic on the famed Hayward Field track earlier this month.

"She's in a different orbit right now," her long-time coach, Clyde Hart, said. "She's doing things in training and in workouts that she's never done before."

Partly because she's feeling healthier than ever. She spent five years fighting an autoimmune disease called Behcet's syndrome, only to discover that maybe it was misdiagnosed.

A visit to a new doctor last year resulted in a new diagnosis, a new course of treatment and a renewed sense of relief.

With Behcet's, Richards-Ross experienced ulcers inside her mouth so painful she could barely eat or talk, and lesions up and down her legs so piercing she struggled to stretch before running. She was on medication that helped and it led to fewer flare-ups.

Now, she's being treated for a skin disease and she's on milder medication.

"I'm off the other ones and I can tell a difference in my training," Richards-Ross said. "I don't feel the same fatigue that I used to feel. No more joint pains. I'm very happy and hopefully the worst is behind me."

Hart has definitely noticed a difference.

So much so that he's even drawing comparisons to his former student, Michael Johnson, who became the first man to win both the 200m and 400m at the 1996 Atlanta Games.

"Sanya's at the same place Michael was at in 1995 and '96, when he broke through and started running record times," Hart said. "She's stronger now and learned the race a little bit more. I think it's that time for her."

Had the races been reversed and the 200m up first, Richards-Ross isn't sure she would be attempting this challenge. That's why Felix shied away from the 400m, because she doesn't want anything to interfere with her 200m. The 400m comes first on the schedule at both the Olympics and at trials.

Felix attempted the 200-400m double at Worlds in South Korea last summer, only to finish second in the 400m and then wind up a disappointing third in the 200m, when she didn't have her customary kick because of fatigue.

"I said from the beginning that what's most important for me is what's going to help me run my best 200m," said Felix, who will also run the 100m.

Making the 200m team will be no easy task. The field includes not only Felix and Richards-Ross, but also Carmelita Jeter, Bianca Knight and Shalonda Solomon.

"I look forward to seeing the best line-up," said Richards-Ross, who needs to finish in the top three to earn a spot on the Olympic squad.

There was a time when Richards-Ross viewed this Olympics as her last. She wants to start a family one day and didn't know if she would be around for the Rio Games.

Suddenly, she's having a change of heart.

Even sooner than that, she wants to start moving into her new house. Judging by what she's seen in pictures, her husband has picked out a winner. Ross signed a three-year deal with the Jaguars in March after helping the New York Giants to a Super Bowl title.

"It's a very nice place," Richards-Ross said. "That's the nice thing about Jacksonville - you get a lot of land. It has beautiful weather, beautiful palm trees. It's going to be like a resort every day."