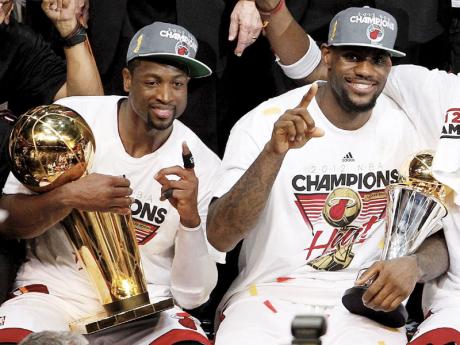 The Miami Heat's Dwyane Wade holds the the Larry O'Brien NBA Championship Trophy and LeBron James holds his Most Valuable Player trophy after Game 5 of the NBA finals basketball series against the Oklahoma City Thunder on Thursday in Miami. The Heat won 121-106 to become the 2012 NBA Champions.-AP

Not that one two summers ago, the welcoming rally where he boasted of multiple titles, perhaps without realising how hard it would be to win just one.

He dreamed of this moment, with teammates surrounding him and the NBA championship trophy beside him.

"You know, my dream has become a reality now and it's the best feeling I ever had,'' James said.

James had 26 points, 11 rebounds and 13 assists, leading the Miami Heat in a 121-106 rout of the Oklahoma City Thunder on Thursday night to win the NBA Finals in five games.

Ripped and ridiculed for the way he announced he was leaving Cleveland and taking his talents to South Beach, it's all worth it now for James.

Best player in the game. Best team in the league.

"I'm happy now that eight years later, nine years later since I've been drafted, that I can finally say that I'm a champion and I did it the right way,'' James said. "I didn't shortcut anything. You know, I put a lot of hard work and dedication in it and hard work pays off. It's a great moment for myself.''

And for his teammates, who watched the Dallas Mavericks celebrate on their floor last year.

James left the game along with Dwyane Wade and Chris Bosh for good with 3:01 remaining for a round of hugs and the start for a party he's been waiting for since arriving in the NBA out of high school as the No. 1 pick of the 2003 draft. James hopped up and down in the final minutes, shared a long hug with opponent Kevin Durant, and then soaked in the 'MVP! MVP!' chants during the raucous postgame.

a lot of hard work

"I wanted to become a champion some day,'' James said. "I didn't know exactly when it would happen, but I put in a lot of hard work."

He was a choker last year, the guy who came up small in the fourth quarter, mocked for "shrinking'' in the moment while playing with what he called 'hatred' in trying to prove his critics wrong.

The disappointment of losing to Dallas in six games a year ago vanished in a blowout of the demoralised Thunder, who got 32 points and 11 rebounds from Durant.

Bosh and Wade, the other members of the Big Three who sat alongside James as he promised titles at his Miami welcoming party, both had strong games. Bosh, who wept as the Heat left their own court after losing Game 6 last year, finished with 24 points and Wade scored 20. The Heat also got a huge boost from Mike Miller, who made seven 3-pointers and scored 23 points.

The Thunder were making a remarkably early trip to the finals just three years after starting 3-29, beating the Mavericks, Lakers and Spurs along the way. With Durant, Russell Westbrook, Serge Ibaka and James Harden all 23 or younger, the Thunder have the pieces in place for a lengthy stay atop the Western Conference.

But their inexperience showed in this series, a few questionable decisions, possessions and outright mistakes costing them in their franchise's first finals appearance since Seattle lost to Chicago in 1996. Westbrook scored 19 but made only four of his 20 shots, unable to come up with anything close to his 43-point outing in Game 4 and Harden finished a miserable series with 19.

"It hurts, man," Durant said. "We're all brothers on this team and it just hurts to go out like this. We made it to the finals, which was cool for us, but we didn't want to just make it there. Unfortunately we lost, so it's tough."