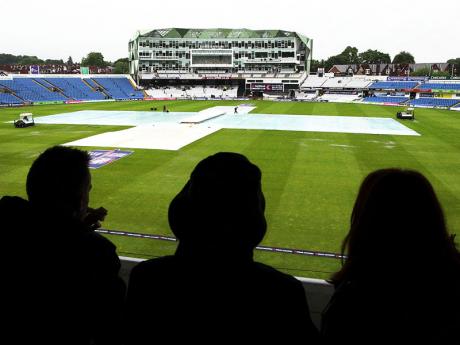 Members of the public are seen looking on at the ground staff working to clear the pitch, ahead of the one-day international match between England and the West Indies at Headingley Cricket Ground, Leeds, England, yesterday. The game was abandoned without a ball being bowled.-AP

LEEDS, England (CMC):West Indies' quest to salvage pride from a wretched one-day international series ended in disappointment when persistent rain washed out the third and final game, without a ball bowled here yesterday.

With the outfield at Headingley saturated, match officials were left with no choice but to abandon the contest at 1:11 p.m. (7:11 a.m. Jamaica time).

England won the series 2-0 after taking the first ODI at the Rose Bowl by 114 runs last Saturday and the second game at the Oval by eight wickets on Tuesday.

The wash-out summed up the West Indies fortunes in a series where they were tagged as favourites but failed to live up to expectations.

"All of us were happy with the prospects for the ODI series. But this is a perfect case of 'cricket don't play on paper'," captain Darren Sammy said afterwards.

"You could have the best-looking team, but at the end of the day, you have to go out on the pitch and perform. We have not done this in the ODI series and England went about doing the job very professionally."

With West Indies also losing the preceding three-Test series 2-0, Sammy said his side would now focus on finding redemption through Sunday's Twenty20 International.

He said a win at Trent Bridge would set the tone for the New Zealand series which begins at month end.

"Winning the T20 would be a good way to end and finish on a high note, so we can take that momentum into the series we have against New Zealand," he said.

"Winning would be a good way to finish."

Rain has wreaked havoc on the Windies tour of England, ruining the opening tour match at Hove last month and returning to wreck the two-day tour match at Grace Road.