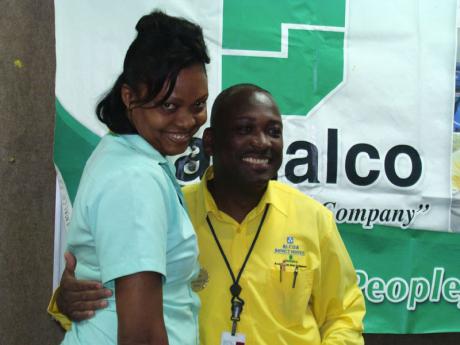 "She is ours" appears to be the kudos from Leo Lambert, manager of corporate service and government affairs at Jamalco, during an appreciation ceremony for that company's footballers and netballers earlier this week. -photo BY Richard Bryan 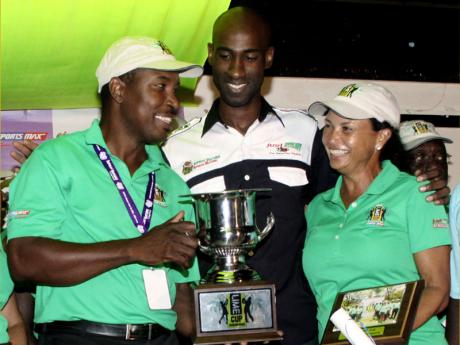 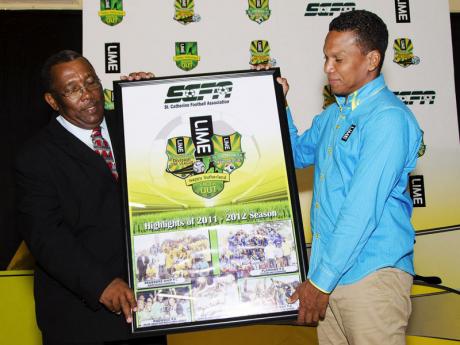 Rain on Sunday played havoc with the sixth round of the Reggae Jammin Business House 50-over cricket league, preventing play in any of the five scheduled matches.

The secretary of the Business House Cricket Board, Paul Edwards, said none of the affected matches will be rescheduled. They will be treated as drawn games with each team awarded a point.

The 50-over league moves into its seventh round tomorrow with five matches scheduled. These are Jamalco vs Jamaica National Building Society (JNBS) at Jamalco ground in Clarendon, Red Stripe vs Jamaica Broilers at Red Stripe Oval, Spanish Town Road; LIME vs Bank of Jamaica (BoJ) at Chalmers Avenue; Digicel vs Sagicor at Kensington Park; and Jamaica Urban Transit Company (JUTC) vs defending champions National Housing Trust (NHT) at Jose Marti. All matches start at 10 a.m.

The Gleaner thus tasted defeat for the first time in four matches, while UWI have won two while losing as many. UWI have beaten The Gleaner and Carib Cement, while losing to defending champions Petrojam and Scotiabank.

In another Division I match at Alpha on Wednesday, Petrojam were held to a 1-1 draw by NHT, who opened the scoring via Andre Palmer in the 18th minute. However, Jothan Watson equalised for the defending champions two minutes later.

At Bull Pen on Wednesday, the match between Carib Cement and Jamaica Customs was blown off midway the first half, this after Jamaica Customs' Ricardo Sterling sustained a broken leg in two places.

SDC have now won four matches, while losing two to be joint second in the Division I standings with Jamaica Brandy, both on 42 points. Leaders Jamaica Fire Brigade also lost for the second time in the sixth round. They were beaten 140-137 by National Baking Company, but still lead the standings with 44 points (four wins).

In other matches played on June 15, NCB defeated Wray & Nephew 151-147, last year's Division II champions Kingston Wharves beat Berger 144-133, while Jamaica Brandy handed The Gleaner their third defeat of the season, beating them 142-135 in an away match at Wray & Nephew Limited.

In Division II, Courts are unbeaten in six matches, following their 160-138 home win over Jamaica Observer on June 15. As a result, Courts enjoy a clear lead in the standings with 61 points.

The annual 3-on-3 Business House basketball competition was launched last Saturday afternoon with the opening rally and dress parade at the Stadium courts.

The competition kicks off on Monday evening at the Stadium courts with play in both Division I and II.

MegaMart, meanwhile, emerged rally champions, ahead of JTA Co-op Credit Union and NCB 'A', while David Strachan of NCB 'A' won the three-point competition and MegaMart's Anthony White the slam dunk competition. A total of 29 teams divided into two divisions will contest the competition, which is organised by the Business House Basketball Association.

Jamalco salutes its netballers and footballers

Local alumina giant Jamalco took time out this week to dine and salute members of its netball and football teams.

The netball team recently defeated Tivoli Gardens to claim their ninth hold on the Berger Paints Super League title. The football team, which was formed last year, narrowly failed in their bid to qualify for the South Central Super League, after placing second in the Captain's Bakery Major League. Their stated goal is to emulate their netball counterparts - playing in the top tier of football - the National Premier League.

All members of the two teams, including coaches and support staff, were provided with specially crafted Jamalco medallions.

Jerome Maxwell, general manager, told the gathering the gesture was a motivational one as well as to indicate the company's gratitude.

"All our teams continue to make us proud and we will continue to provide them with all the support they need," said Maxwell. "They are an important part of our family and they spread our values of discipline, excellence and best practices."

Guest speaker for the occasion was former Olympian and now first vice-president of the Jamaica Athletics Administrative Association, Grace Jackson.

Carl Campbell scored in the 23rd minute as Round Hill defeated Haughton 1-0. The second semi-final match between Holland PYC and Northampton ended 2-2.

With the full backing of their spectators, home side Holland romped to a 2-0 half-time lead courtesy of goals by Orville Taylor (10th minute) and Sadique Spencer (25th minute). However, the second half saw a Northampton resurgence, as they found two goals through Govanne Turner (67th) and Ramone Mullings (77th).

All four teams will turn their attention to the second leg of their respective semi-final matchups, tomorrow, at the New Town Community Centre in Black River.

Juventus provided a torrid welcome for Harmons in the Jamalco Football League, with a 3-1 win at Wembley football Club in Clarendon. Harmons had taken a two-year hiatus from the league.

Juventus' goals came from the boots of Ian Palmer, Andrew Vanzie and Paul Harris, while Rollin Ranger secured Harmons' consolation goal. The Bottom Halse Hall team achieved the only other win of the third round, as Dwyane Harris' goal gave them a 1-0 win over Port.

Two other games were drawn. Savannah and Top Halse Hall ended 0-0, while Sunset rallied from a 1-3 deficit to record an exciting 3-3 draw with Wembley.

Tomorrow: New Bowens vs Harmons at 2 p.m. and Napoli vs Mineral Heights at 4 p.m.

Fullerswood, who won one of two preliminary zones, were 3-1 winners over Southern Stars.

Both finalists are unbeaten and regardless of the final result in next weekend's final, both will be promoted to the Division One competition.

Manchester will welcome the start of its first-ever female football competition, courtesy of the Manchester Football Association (MFA).

The tournament will kick-off this morning at 10 a.m. with a one-day extravanganza at the Mt St Joseph Prep field on Manchester Road in the parish. Dalton Wint, president of the MFA, spoke of the rationale.

"We are on a mission to develop all aspects of our football," he told The Gleaner. "Right now we are going to be aggressive in how we engage our clubs and schools. We have a senior team in Los Perfectos, but most of these players come from outside of the parish. We want to develop our own talent pool and hopefully gain other teams."

The MFA has initially secured the participation of six teams. It will be open to Under-20 players, with match conditions stipulating nine vs nine.

Limited sponsorship for the competition will come from C&D Construction and Engineering, who also sponsors the FA's Under-15 and Under-13 competitions.

Defending champions Wanderers face-off against an improved Portmore United side in the final of the LIME-Leander Marshall Portmore Under-13 Football League at the Cumberland playing field today at 3 p.m.

The two met in their final preliminary round game where Wanderers won 2-0.

In last week's semi-finals, Wanderers defeated Daytona 4-3 on penalties, after the teams were scoreless in regulation and extra-time. Portmore United's early goal, an eighth-minute strike, was enough to get past early favourites Cumberland FC, a team that promised much this season. They were undefeated coming into their semi-final encounter.

Cumberland FC, fresh from their 4-1 thumping of Westchester on Sunday, will gear up to meet Bridgeport which lost their first game as the Portmore Under-15 League continues tomorrow with a double-header at the Westchester field, match time 2 p.m. In the late kick-off at 4 p.m. Westchester take on Reid's Pen. At the Passagefort field, host team Passagefort United take on East Portmore Portals at 2 p.m., while at 4 p.m. Daytona face Newtown Braeton.

Arguably the two best teams in the Portmore leg of the Social Development Commission (SDC) All-Island Twenty/20 Community Cricket League, Bridgeport and Portmore Pines face-off at the Bridgeport sports ground this afternoon in the final at 2 p.m.

Big hitter Shane Brooks, who blasted two centuries this season, captain/manager Lloyd Blacks, and Marlon Gardner are expected to give Bridgeport a quick start. With stability coming from veteran batsman Delroy Morgan and all-rounder Winston Myers, Bridgeport will counter through Damion Bryce, Kemar Foster and Marshall Marsh. The final will be preceded by a third-place play-off between Port Henderson and Hamilton Gardens.

Defending champions Old Harbour Bay United will start favourites as they take on New Raiders in the opening St Catherine Football Association Central Under-15 semi-final match of a double-header at the Spanish Town Prison Oval, tomorrow afternoon at 2:30.

Old Harbour Bay will build their hopes around striker Ramon Crawford, a potential match winer. Old Harbour Bay topped their preliminary Group A with four victories to finish ahead of DB Basovak, while Rivoli finished at the summit of Group B ahead of New Raiders. In the second semi-final at the venue, the dangerous Rivoli United team will oppose DB Basovak at 4:30.

This match will precede an official uniform parade and opening ceremony at 10:00.