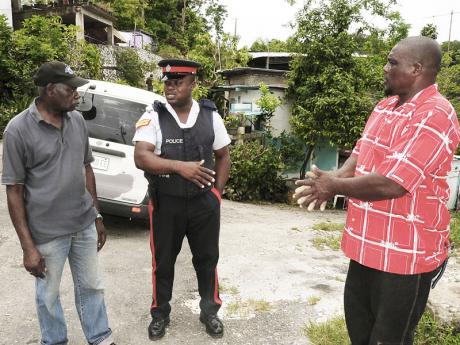 Dukeval (right) and Martin Bowen (left), residents of Rejoin in Hanover, have an animated discussion with Corporal Nesta Barrett of the Community Safety and Security team and supervisor of the community's police youth club. 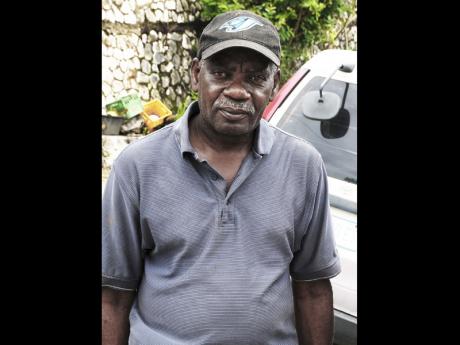 WESTERN BUREAU:The Jamaica Constabulary Force (JCF) has been lauded for its hard work in Rejoin as the community recovers from a quadruple murder last month.

"This incident really shook us up. It was terrible to lose people you have been around for all your life in this way; however, we are bouncing back, thanks to the police more than anyone else," said 67-year-old Martin Bowen.

"The police have been the best. They are our support and are with us 24/7."

A fourth man, 41-year-old David Harding, was gunned down as the killers made their escape.

The residents are determined to prevent a recurrence of the incident, the second in almost two years, and pointed to a closer working relationship with the police as their strategy to achieving that goal.

According to Sergeant Charlene Grey-Morris, subofficer in charge of the Community Safety and Security team in Hanover, her office provides softer policing in the day, while the operations support team gives more robust service in the night.

The police have also succeeded in establishing the Rejoin Citizens' Association Neighbourhood Watch, and the police youth club had its first meeting last week.

"The new direction of the force is to find ways and means of bridging the gap between the citizens and the police," Grey-Morris told Western Focus. "With more confidence in us, they will help us to return the community to the crime-free village it once was."

The police are now seeking to appoint a member of the community as a district constable.

Dukeval Bowen is convinced that a united approach will bear fruit. "We just have to stay together. This is a fun-loving community, a united place," he said.

Added Martin Bowen: "Crime is not welcome here, and we are taking a stand. This was a place where you would not even hear of a domestic dispute. I have always said that there is no place like Rejoin, and despite these two incidents, that is how we intend to remain."