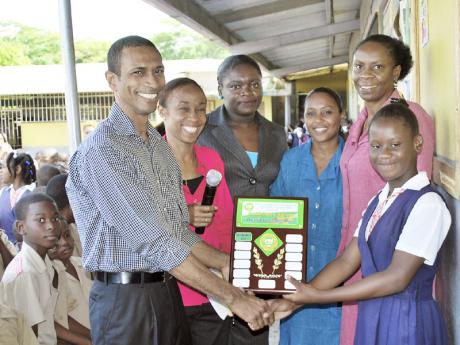 President of the Westmoreland Chamber of Commerce Nigel Myrie presents the winning plaque for the reading competition to Allison Smith of Petersfield Primary School. With them are coordinators of the reading competition (from left) Dorcas Myrie, Leonie Arnold-Ruddock, Burnetta Rose, and Laurett Dell-Jones.- Photo by Dalton Laing

She emerged victorious from a field of over 30 of the school's best readers.

According to one of the coordinators, Dorcas Myrie, the competition was designed to encourage reading among students, with the hope that it would create interest while broadening their knowledge base.

Allison was presented with a plaque by Nigel Myrie on behalf of the Westmoreland Chamber of Commerce.

"My challenge to you is that you can only reach your full potential if you learn to read," said Myrie. "A person who can't read is like a blind man who has to be led. So you must learn to read because your future depends on it."

The chamber president also announced that there would be two prizes for the competition next year to award the champion boy and the champion girl.