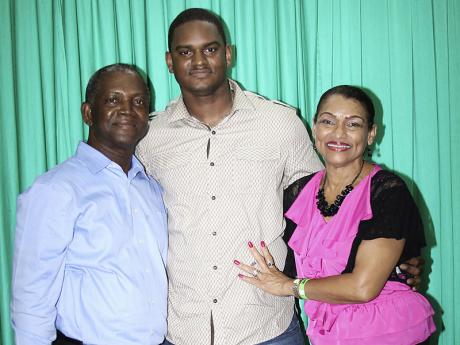 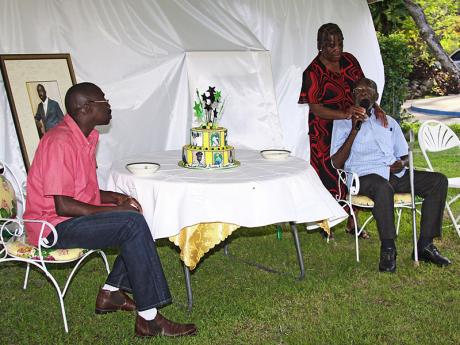 Police Superintendent Clinton Laing (left) looks on as his father, Randolph Laing, who is assisted by a family friend, addresses the gathering at Rafters' Village in Martha Brae, Trelawny, last weekend. The occasion was a double celebration for the Laings to mark their 50th and 95th birthdays, respectively. - Photos by Richard Morais
1
2

DUNCANS, Trelawny:Trelawny was the venue for birthday celebrations of three of its sons, vice-president of purchasing and logistics at Norwegian Cruise Line Alvin Dennis, police Superintendent Clinton Laing, and his dad, Randolph Laing.

Dennis' celebration was a surprise party held at the Baptist Centre in Duncans, his former hometown and birthplace. Friends and relatives spoke glowingly of his commitment. His sister, Joy Dixon, described him as "a brother extraordinaire". The emcee for the occasion was his brother, Deacon Lenox Dixon.

Dennis was in Jamaica on vacation with his wife of 35 years, Everene, and his son, Dr Alvin Dennis Jr, along with six of their friends. His mother, Doris Dixon, still lives in the community.

The celebrant spoke of his love for Jamaica and his family. He also shared that the discipline instilled in him by his parents charted his achievements.

It was a double celebration at Rafters' Village in Trelawny for Superintendent Clinton Laing as he celebrated his 50th birthday with his father, Randolph, who was enjoying his 95th.

Supt Laing's birthday was on May 14, while the senior Laing celebrated his on June 3. Scores of people, including Ellis James Laing, brother of Clinton, joined the festivities. The cake was an eye-catcher as it had the pictures of the two birthday 'boys'.