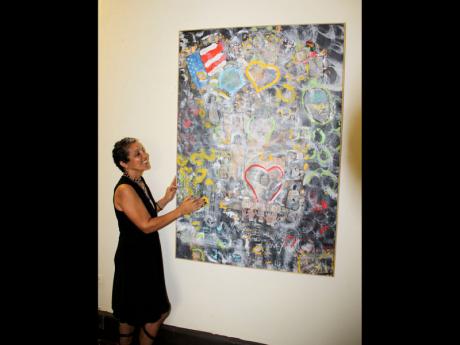 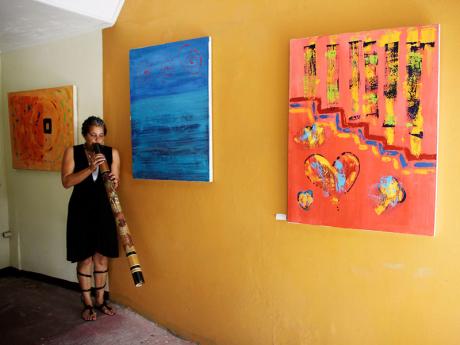 Jacquelyne Hussey-Pearson plays the didgeridoo alongside her paintings at Café What's On, Kingston.- photo by Amitabh Sharma 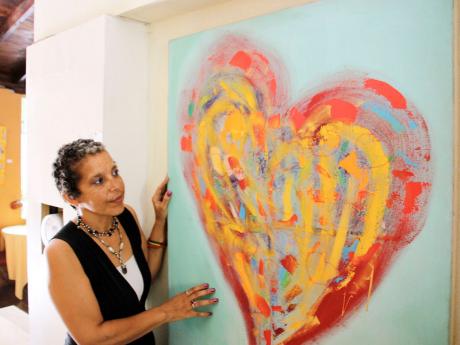 Painter Jacqueline Hussey-Pearson with her piece, 'Global Hearts One Love Many Hearts' - Photo by Amitabh Sharma 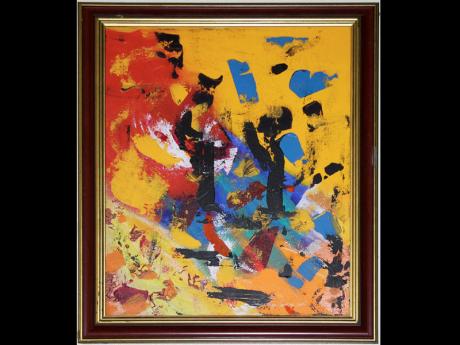 'Mississippi Blues', a tribute to the victims of Hurricane Katrina.
1
2
3
4

What is art? It is the response of man's creative soul to the call of the real, said Indian poet, playwright and painter Rabindranath Tagore; a phrase that encapsulates Jacquelyne Hussey-Pearson's life and work, where she pours all her emotions inspired by the vastness around her.

This multifaceted artist's life story is like a palette, glowing rich colours, mixed with speckles of grey, and exuding grit and courage.

A breast cancer survivor, she has never let physical pain affect her, and instead, she has immersed herself into putting more colour and creating larger-than-life images.

"I am a very blessed spirit and the people around me encourage me and I am enhanced by critique because it can always turn my work into (something) positive," she said.

Abstracts have been her forte since she started painting, from capturing Hurricane Katrina's landfall in New Orleans to her ode to Barack Obama as the first black president of the United States of America, Hussey-Pearson's abstracts strive to tell a story.

"I was always looking at colours when I was a little girl," recalls Hussey-Pearson, who grow up in Dundee, Scotland, where her family moved from England. "Abstracts always fascinated me and I started painting abstracts." Encouraged by a neighbour, she went on to win accolades for her work, but her adoptive parents thought it was a waste of time. "They started tearing up all the paintings," she said, as a hint of sadness touched her voice.

Despite the circumstances, the hues of the painter inside her never faded, "I continued painting through the years, I used to paint for my friends, and they still have those paintings," Hussey-Pearson said.

And years later, those colours were ready to flow from her imagination to the canvas, the creative juices which were in cold storage in the United Kingdom seemed to open up to the warmth of the Jamaican climate.

"I came to Jamaica in 1998 with my then husband," she recalled as her vivid expressions spread like colours dabbling in their tones on a blank slate. "This is where I discovered myself. I discovered (my) canvas and everything unfolded."

Armed with paints, colours, canvas and myriad of creative ideas, Hussey-Pearson put the interpretation of her adopted home. "My first work was a triangular painting, which had a Jamaican theme ... it had Red Stripe, Guinness, Ting and I painted it at Reggae Beach," she reminisces as she panned her paintings that adorn the walls of Cafe What's On.

This was the launch pad that propelled her to express her emotions on canvas and share them with the world. "I have been painting ever since," she exuded.

"I have colours of the Rastafari and colours of the Jamaican flag, green, black and gold, it's part of my heritage, and I have been, and continue to be, inspired by African and Jamaican influences."

Hussey-Pearson opened an art gallery which she operated for a couple of years and also continued to blend her journey in arts, dabbling with colours, writing and singing songs and also learnt to play the didgeridoo, which is a wind instrument developed by indigenous northern Australians.

"I had a dream of two moons and a red planet and continue to put to the seven-foot canvas, which has many, many elements of life and (will) one day be shown publicly."

"The joy at this point of time, I have been invited to the New York League of Artists for one month to work with these artists. It is such an honour for me to be accepted. And that is my next step."

She is discovering and living life in every moment of time, "I have been inspired as an artist, I also take photographs. I collect history, I call myself a digital historian of Jamaican music. I sing, there are songs that I have created, Warrior Woman, I Am Sorry, We Can Make It and I have many songs still to go to the studio that I have written."

"I must learn from all and be enhanced," she stated. "I continue to paint my emotions, my feelings, whatever comes to me ... I just paint."