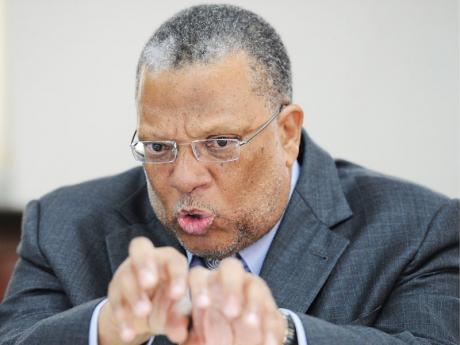 Below is the first instalment of a presentation made by Claude Clarke to the PwC 2012 post-Budget briefing on June 12.

I believe it is unlikely that anyone now doubts that Jamaica's economy is desperately in need of reform. It has not seen vigorous growth since the late 1980s. And since then, it has been crawling along, barely able to keep up with our population growth.

In the meantime, notwithstanding the international financial crisis, the developing world has experienced an unprecedented economic boom.

But we are hopeful people. And despite several disappointments, many had hoped that the opportunity of a new government to restart negotiations with the International Monetary Fund (IMF) would have been seized. And a genuine effort to halt our decline and set the country on a new path towards development would have been made.

But after all the polemics and political gamesmanship of the just-completed Budget Debate, Jamaicans are no closer to seeing any meaningful movement in this direction.

At the centre of our economic dilemma is the staggering debt of nearly $1.7 trillion. But debt, in and of itself, is not necessarily a negative thing. All of us know that debt, properly employed, not only provides the means of its own servicing and repayment, but it offers the borrower the opportunity to be better off by using it. Jamaica has not been that kind of borrower.

Our debt has not made us better off. It has added very little, if at all, to our productive capacity and is now effectively a dead weight around our neck: More than $600,000 per man, woman and child. And we do not have the option of ignoring it.

But as large as the debt is, it is not what should be of greatest concern. Even more worrying is the incapacity of the country to service it.

Most of the discussion around the issue seems to have ignored the fact that on the way to accumulating this enormous liability (which according to this month's IMF Article IV review is 140 per cent of GDP), much of our productive capacity was eroded by our own home-grown economic crisis which we loosely call FINSAC. That unfortunate experience left the country's ability to produce severely compromised. And it is the incapacity of our damaged productive engine to generate the economic output needed to service this large debt that should be of greatest concern to our policymakers.

While others were tooling up, some 40,000, mainly producing businesses, are reported to have shuttered during the FINSAC debacle. Manufacturing and manufacturing employment suffered a 50 per cent decline. And the valuable productive skills that were lost in the process may now be very hard to recover.

And though all sectors are important, the significance of manufacturing cannot be overstated and must not be overlooked. Worldwide, and here in Jamaica, industrial production creates high-value output. The value of the economic output of an industrial job is twice that of a services job and more than five times as much as a job in agriculture. We lost a lot of our industrial capacity - in plant and machinery, in technology and skills, and much of it may not be restorable in the short to medium term - unless the Government develops a clear strategy to do so.

And do so we must if we are going to be able to afford to pay our debt. This is where Jamaica's economic strategy needs to be focused.

Many are telling us, however, that what is needed is an economic stimulus to increase aggregate demand as a means of generating growth. This may be true for an economy with available productive capacity capable of responding quickly to demand. But Jamaica's case is different. Because we have lost much of that productive capacity, such a stimulus would be likely to have the opposite effect on our economy today. Our greatly depleted and uncompetitive productive capacity is not capable of responding. The response would come; but it would come from foreign suppliers. Imports would surge and our balance of payments problems would be further exacerbated.

We need clear thinking to properly address the crisis we face. We must be guided by common sense and basic economic prudence.

First, we cannot service our debt unless we have the economic output with which to do it.

Second, we cannot have the economic output unless we have the capacity and can produce competitively.

And third, if the debt-servicing programme we adopt does not enhance our capacity and competitiveness, it will not be sustainable, and the result will be calamitous for the economy.

That is why the approach taken by the Government in the recent Budget is so hard to fathom. The Budget is almost entirely committed to extracting resources from the economy to service the debt, not to increase our capacity to do so. Nowhere is there a suggestion that there is a new plan to increase economic output

It must be obvious to both the Government and the IMF that to squeeze more debt payments out of our severely distressed economy without a workable strategy to increase economic output in the short to medium term will be an act of economic suicide.

I am sure we all realise that there is no alternative to the IMF. I have maintained that the Fund should have been engaged much sooner. And it was strange that the 2007 JLP administration did not recognise this need until 2009, after the international economic crisis struck; and created the false impression that that was the principal cause of our economic dilemma.

But even then, they so badly misread our economic situation that they went for a programme that was all about fiscal consolidation and debt repayment, rather than a programme designed to revive the economy's productive capacity as the foundation for repaying our debt.

That programme is now dead because the economy did not have the wherewithal to meet its performance targets.

It is now 2012, and a new government is in place; but we seem to have learned little from the experience of that failed IMF programme. Based on the Budget presented, we seem to have returned to the same manifestly unworkable formula: squeeze debt repayment from a shrinking economy.

It cannot work! But the Government seems to have placed this unworkable idea at the centre of its economic plan.

An annualised tax package of more than $23 billion, almost two per cent of GDP, has been imposed, not to begin the rebuilding of productive capacity, but to pay down our debt. There is not even the suggestion of a change to our macroeconomic arrangements that could tweak competitiveness, or attract foreign or local investment to production.

This two-per-cent-of-GDP tax package is not a one-off deal. It will continue to be extracted from the economy even while the economy continues to stagnate. The best growth projections of the Government and the IMF are barely able to keep pace with population growth. It is again a case of "here we go again."

The Budget contains nothing that is likely to attract investments in new productive capacity, or to encourage increased output from existing capacity; nothing to encourage exports and discourage production-destroying imports; nothing to close our US$1-billion CARICOM and US$5-billion global trade deficit. Nothing! There is no gain. There is only pain!

Without economic expansion, how is the country's ability to pay out two per cent of its GDP every year going to be maintained?

Can you imagine the consequences of giving blood every day and not having the nutritional capacity to replace it? You will be progressively emaciated, and then you will die. So will an economy.

This does not mean that there should be no austerity. Austerity, properly thought out and strategically applied, can be beneficial to an economy.

Cutting unproductive costs from an economy, using a surgeon's scalpel instead of the blunt instrument of indiscriminate taxes, can yield positive results. In fact, the economic successes of countries right here in the Caribbean owe much to this approach.

Claude Clarke is a businessman and former minister of trade. Email feedback to columns@gleanerjm.com.