Whither the European Union? 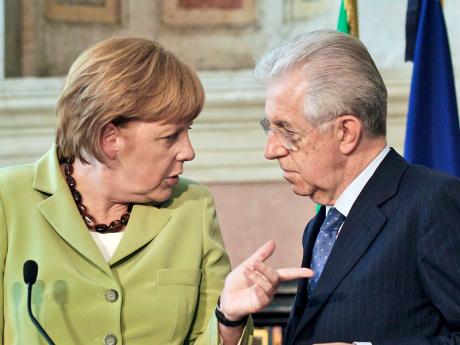 Should Jamaica leave CARICOM? The war drums are beating for our secession from this minor regional trading bloc in which some countries are enjoying an advantage regarded as unfair and at our expense. Jamaica's 'one from 10 equals nought' withdrawal from the West Indies Federation brought that pre-Independence experiment in regional integration to a crashing end.

Of far greater significance to the world and to our little region than the death of CARICOM is the threatening disintegration of the European Union (EU). In the United Kingdom, the future of the EU, in light of the Spanish bailout, the most recent in the series, and of the Greek vote last Sunday, is one of three matters dominating the news.

The other two are easy to guess: The Diamond Jubilee of Elizabeth II and the future of the monarchy, and the upcoming Olympics in London.

In the course of the next six weeks, Jamaica is to have a national referendum on The Queen as head of state. That is if the prime minister is to deliver on her proposition (I have not said promise) that the country should celebrate its golden jubilee with a different political arrangement.

BRITS WANT TO PULL OUT

While we await our referendum this year, next year, or whenever, the UK's Daily Express newspaper, which has been leading a 'Get us out of the EU' crusade, is reporting that 80 per cent of British voters "are crying out for a referendum" on the future of Britain in the EU. The June 12 issue reports poll results indicating that 49 per cent of voters want their voices heard on the issue right away, while a further 33 per cent are of the view that there should be a vote "in the next few years".

No less a person than George Osborne, the chancellor of the exchequer (the equivalent of our finance minister), appeared in his own guest column, 'We will not prop up Europe's banks', in The Sunday Telegraph of June 10 to say: "We are approaching a moment of truth for the Eurozone. After more than two years of uncertainty, instability and slow growth, decisions taken over the next few months could determine the economic future of the whole European continent for the next decade and beyond ... . The latest bout of uncertainty has been focused on the future of the Spanish banking system."

Osborne went on to say he has been arguing for a year that the Eurozone needs to follow the "remorseless logic" of the monetary union towards much greater fiscal integration. These political implications were the main reason why he and many others, including The Sunday Telegraph, he said, had campaigned against UK membership of the euro.

"The solution in the Eurozone doesn't have to be a full-blown United States of the Eurozone, but if it is to be successful, it is likely to include most of the mechanisms that make other currencies work: more support from stronger economies to help weaker economies adjust; more pooling of resources; a shared backstop for the banking system through a banking union; and, as a consequence, much closer collective oversight of fiscal and financial policy ... . A banking union is a natural extension of a single currency," the chancellor wrote.

"But we are clear," Osborne declared, "that Britain will not take part. British taxpayers will not stand behind Eurozone banks, and British voters want their government to be in charge of supervising our own banks, especially in a crisis."

The UK's economic recovery is being killed off by the euro crisis, Osborne complains.

The Sunday Telegraph itself warned in its June 10 editorial that, "Britain must choose its way in the EU's darkest hour."

The paper said, "George Osborne, the chancellor of the exchequer, writing in The Sunday Telegraph today, says: 'We are approaching a moment of truth for the Eurozone.'" This is an understatement, for the "moment of truth" is actually a very profound existential crisis. The Telegraph felt that there was a serious possibility that Greece would exit the euro and default on €300 billion of external public debt within the next few weeks. And the paper said JP Morgan had calculated that Spain's banks would need an injection of about the same vast sum to stave off imminent collapse.

The amounts that have been pledged by the European Central Bank (ECB), in its failed attempts to keep the weaker economies within the debt-to-expenditure ratio required for membership of the euro, are utterly unsustainable, the Telegraph declared. And at some point soon, the paper argued, the ECB is going to run out of money, or credibility, or both. What happens next, no one knows, it ominously warns, but the potential for economic catastrophe within the Eurozone - runs on banks, hyperinflation, depression, destruction of living standards - is very real.

"The euro itself may fall apart before those disasters occur," the editorial suggests. "A 'United States of the Eurozone', as Mr Osborne describes it," the paper suggested, "is probably the only hope of avoiding a disorderly break-up, with calamitous consequences. But it is far from obvious that it is achievable."

But many economists and politicians, the Telegraph observed, are starting to wonder whether, instead of advocating closer union, it might not be better to advise members of the euro to admit that the currency has failed, and work out ways to dissolve it and revert to national currencies.

"The chancellor and the prime minister," the paper said critically, "remain wedded to the hope that the single currency can be saved by an agreement between its members to accept closer union. Their hope may turn out to be a piece of excessive optimism which, by merely putting off the evil day when the euro falls apart, thereby makes the break-up much harder to manage and more economically damaging."

Columnist for the newspaper, Christopher Booker, in his piece, 'The cloud darkening this reign was Europe', said, "There was one shadow over our celebrations of The Queen's Jubilee so vast that it was not really noticed at all.

"But, amid the endless repetitions of how the celebrations made us 'proud to be British', and how 'we still do pageantry better than anyone else', and how much we admire everything The Queen has stood for," he said, "almost entirely omitted was any reference to the most far-reaching of all the changes to the UK's status in the world during her reign - everything that has followed from that day in 1973 when we became part of the new political entity then taking shape in Europe."

The Queen, the columnist said, may deserve admiration for the way she has carried herself for 60 years. "But under the Treaty of Maastricht, she became, like the rest of her subjects, just another "citizen of the European Union".

As news from the Eurozone daily reminds the citizens of the UK, Booker said, when Edward Heath, as prime minister, and Parliament took the decision 40 years ago for Britain to join the EU, "they allowed us not to be absorbed into a genuinely living, loved and inspiring entity, but to be shackled to what is becoming, ever more obviously, no more than a decaying corpse."

While German Chancellor Angela Merkel is warning that any dismantling of the euro is a matter of war and peace in Europe, columnist for The Sunday Times, Dominic Lawson, cites Harvard economist Martin Feldstein's 1997 paper, 'European Monetary Union and International Conflict': "A political union of European nations is conceived as a way of reducing the risk of another intra-European war among individual nation states. But the attempt to manage a monetary union and the subsequent development of a political union are more likely to have the opposite effect."

In-between forgetting his eight-year-old daughter at a country pub where he had been 'chillaxing', and attending the G20 Summit in Mexico, Prime Minister David Cameron, noting that "the stakes are incredibly high", warned that the EU will either have to break up or face perpetual stagnation without reform - a break-up that would have serious financial consequences that would badly damage the world economy.

Mayor of London, Boris Johnson, a Classics scholar, in a Daily Telegraph guest column issued the dire warning that "Dithering Europe is heading for the democratic dark ages". A Greek economy run by Brussels, he frets, will ignore the lessons of history leading to more misery.

The Greek vote last Sunday was, in a way, a referendum, albeit an inconclusive one, on the future of the euro, of the Eurozone and of the wider European Union. It was "the single most closely watched election in years, which amounted to a referendum on whether Greece would become the first country to be forced out of the single currency", "a momentous night in European politics", The Guardian breathlessly reported in its page one story the morning after, 'Greece gives Europe a chance'.

The pro-austerity New Democracy Party marginally won the majority of the votes at only 29.5 per cent in a multi-party contest. But anti-austerity Syriza took 27.1 per cent of the vote. And anti-bailout, anti-austerity votes in total rose from 42.9 per cent in the May 6 polls to 46.2 per cent in the June 17 poll. "Conditions have markedly deteriorated since the first Greek elections in May," The Guardian observed, saying the situation in the Eurozone and around the globe was already catastrophic before the Greek elections and there could be no good outcomes, "just bad and really bad".

Europe and its common currency are at a historic crossroads. And with them the rest of the world locked into a thoroughly globalised economy.