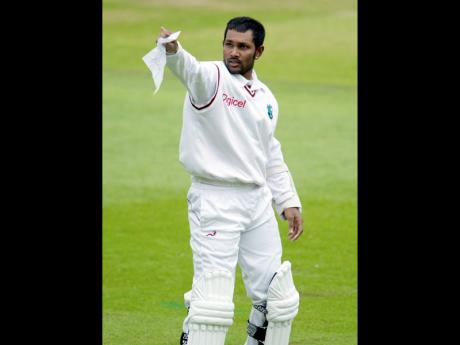 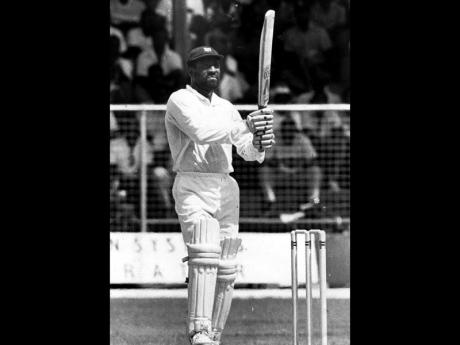 Vivian Richards drove the fear of hell into the bowling line-up of many cricket teams.-FILE
1
2

The crass, classless, clueless charade acted out by pedestrian young cricketer Denesh Ramdin after scoring a Test century as rare as mountain chicken in Trinidad got me thinking about generation gaps.

Denesh's behaviour was the worst I've seen on a cricket field, mainly because of its obvious premeditation but it served the purpose of highlighting young cricketers' ignorance of the exploits of past greats and those exploits' meaning to West Indians. If Denesh was remotely acquainted with this, he'd understand his role and not so embarrassingly expose his limitations. Viv Richards earned his right to criticise. Denesh has earned nothing.

It's like the age-old divide between Father and Son. Everybody wants to talk. Nobody listens.

It's not time to make a change.

You're still young, that's your fault.

In my opinion, churlish young cricketers like Denesh have been encouraged in their baseless, unjustified contempt for those upon whose shoulders they have travelled from obscurity to public acclaim by equally inane next-generation sportscasters who foolishly assert that, in sports, statistics tell the whole story. But, if stats tell all, why bother watching the game?

How can I try to explain?

'Cause when I do it turns away again.

It's always been the same,

From the moment I could talk

So, Denesh, this is me educating you and your generation why you should listen when the likes of Viv Richards talks.

I'm sure I'm the only person who contends Lawrence Rowe is the best batsman of all time. If you conducted a regional poll, the West Indian batsmen voted best would probably be George Headley, Viv Richards and Gary Sobers, respectively.

George Alphonso Headley only played 22 Test matches but averaged more than 60 at a time when he frequently carried the team on his back, earning the nickname 'Atlas'. Like Rowe, Headley's best innings included some in which he made few runs. Headley became great on the Australian tour of 1930-31. Already an acclaimed batting genius, the Aussies had done their homework and recognised he was primarily an off-side player. They prepared a plan for him, bowling on the leg stump to packed leg-side fields. By the end of the tour, Headley was acknowledged as one of the world's best leg-side players.

Before the Tests, in a warm-up game against New South Wales, West Indies were dismissed for 188, of which Headley made 25 in less than two overs. Keen observers insist he never played a better innings. Statisticians, take heed!

Isaac Vivian Alexander Richards, probably the greatest batsman who ever lived, is one whose career can't be described statistically. His 50-plus Test average (would've been much higher but for his sacrifices for the team) doesn't approximate an accurate description of his effect on the world's bowlers. Viv approached batting like a man who knew he couldn't be dismissed. It became legend he'd been hypnotised into believing he was invincible. Viv's walk to the wicket alone sent shivers of fear down the spine of the best bowlers.

But his gift was exceptional hand-eye coordination. I once sat in the Three Ws Stand watching a regional match between Barbados and the Combined Islands. Vanburn 'Saddlehead' Holder, Barbados' fastest bowler, produced a perfect yorker which Viv pulled viciously (yes, 'pulled') to square leg for four. You won't find that in any stats.

Garfield St Aubyn Sobers was the greatest cricketer who ever lived. He had it all: skill, style and substance.

"Trueman to Sobers. A perfect cover drive denied by a brilliant Graveney. No run. Here comes Trueman again. Sobers drives again. This time not even the pigeons on the boundary rails moved."

Show me a statistic for that!

Lawrence George 'Yagga' Rowe was Frank Worrell reincarnated; so stylish; so perfect in his stroke play; so superbly focused, that, like Headley, he often scored under 40 runs yet eclipsed those scoring heavily in the same game.

In one regional game against Guyana, Roy Fredericks destroyed the Jamaican bowling and scored a century. Clive Lloyd scored a double century. Rowe scored 30 or 40, but with such style that all present quickly forgot Lloyd's and Fredericks' innings. Rowe's knock was treated with reverence.

I sat and watched in awesome wonder in 1972 as Yagga, on his Test debut, scored 214 and 100 not out, two perfect innings full of his trademark exquisite timing. The ball seemed never to leave the surface or give any fielder a chance once intersecting Rowe's bat.

In the bowling department, Malcolm Marshall's millions of fans won't like my opinion that the greatest West Indian fast bowler of all time is Michael Anthony Holding (a.k.a. 'Whispering Death'). I'm no statistician, but I did watch the 1981 Kensington Oval Test match when Mikey bowled to Geoffrey Boycott what is unquestionably the best over ever bowled.

Boycott faced six balls, each faster than the one before; failed to touch any; narrowly avoiding being hit several times; before being comprehensively bowled with the sixth delivery. Statisticians will read: "G. Boycott b. Holding 0." The event was much more.

Nobody recalls that Mikey repeated the feat in the second innings. This time, Boycott lasted only five balls before fending off a sharp rising delivery to Joel Garner in the gully. Again, 'G. Boycott c Garner b Holding 1' is all that's available to stats freaks. Boycott has since claimed he repeatedly watched the video and declared himself innocent of any wrongdoing. In fact, his version of events is that England was fortunate to have him because, in his opinion, had anyone else opened, the team would have lost three or four wickets in the over.

Then, in February 1983, I sat in a packed George Headley Stand as India started their second innings trailing by three runs. Mikey Holding, in the twilight of his career, was to bowl the first over to the legendary Sunil Gavaskar. A murmur spread through the crowd like a Mexican wave as Mikey marked out his trademark long run. The cheers grew exponentially loud as Mikey glided in. He passed the umpire silently, as always, and produced the perfect yorker that uprooted Gavaskar's middle stump. Sabina Park erupted into crescendo after crescendo of noise. Again, the scorecard reads: "S. Gavaskar b Holding 0", but is eternally non-descriptive.

Proponents of Malcolm Marshall's claims as the greatest should consider this. Like Lawrence Rowe and Alvin Kallicharran, Marshall strived for West Indies selection for a long time without success. He was unable to displace any of Roberts, Holding, Croft, Garner, Clarke or Daniel. He finally got his chance in 1977 when Kerry Packer signed almost the entire West Indies First XI and the West Indies Cricket Board of Control summarily banned those players. A Second XI, captained by Kallicharran (who'd rejected Packer's advances), toured India. Marshall seized his chance, not only keeping his place when the First team returned but eclipsing most (some say all) of those who had been preferred to him.

and I know that it's not easy

to be calm when you've found

But take your time, think a lot.

Why, think of everything you've got.

For you will still be here tomorrow

but your dreams may not."

Caribbean cricket's tradition, which young statistics-worshipping analysts may never experience, was founded on the atmosphere of jam-packed stadia with rum freely flowing and picnic hampers full of fried chicken and rice and peas, all of which sharpened the wit. The crowd was there to enjoy themselves, which included criticising players mercilessly and humorously. The cricketers' job was to suck it up and play.

One day, I was watching a Melbourne-Kingston cricket match at a full Melbourne Oval. Melbourne were batting and Maurice Foster, as usual, was napping at backward short leg. The bowler strayed leg side; the batsman turned it neatly past Foster who turned and waddled after it in his inimitable style. One inebriate in the crowd shouted, in a booming voice that carried all the way to Papine, "Careful, Fos! Mind yu pull a fat!"

Mikey Holding, in his autobiography No Holding Back (Orion Publishing, 2010), tells of the first time he bowled in Barbados off the short run. Spectators were generous with their views. "Give de ball more air, Holding!" and "Pitch turning yet?" were two of the kinder comments.

Ian Chappell writes about cricket in the West Indies with great fondness as follows: "Cricket in the Caribbean is about bouncers, swaying palms, drinking rum, bouncers, swashbuckling performances, bouncers, music and rib-tickling humour." We get it, Ian. West Indies bowled lots of bouncers. Proving that ironic taunts from spectators weren't the sole province of males, he wrote of a Queen's Park Oval Test experience involving Trinidadian quickie Mervyn Dillon:

"Former West Indies fast bowler Merv Dillon beat the bat with three consecutive outswingers in the first over, causing a lady to rise up from her seat and yell: 'Dillon, enough of the foreplay, let's have some penetration.'"

All the times that I cried

keeping all the things I knew inside.

It's hard, but it's harder to ignore it.

If they were right, I'd agree

but it's them they know, not me.

Now there's a way and I know

So, Denesh, I know it's hard, but please take your Test batting average of 23 and silently hug up whatever criticism is levelled at you by paying spectators or past legends. If you feel the urge to respond, do so with either bat or wicketkeeping gloves. Your mouth can't accommodate both cricket boots.

Father and Son lyrics come from the brilliant mind of Cat Stevens (born Steven Demetre Georgiou), young 1970s British rocker who subsequently became a Muslim; changed his name to Yusuf Islam; and gave up secular singing in 1977. He returned to pop music in 2006 under the name 'Yusuf' and has released two superb albums but finds himself shut out of most Western markets.