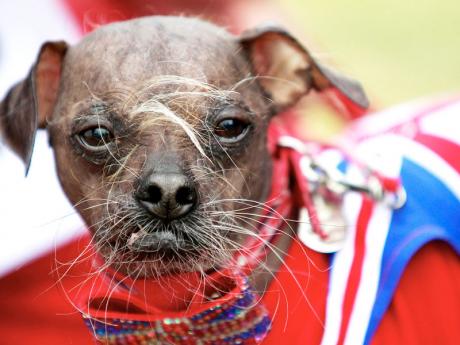 Competing for fame, $1,000 and a year's worth of dog cookies, 'Mugly' won the honour by beating out 28 other ugly dogs from around the world.

The eight-year-old rescue dog from the United Kingdom will also be invited for a photo shoot and will receive a VIP stay at the local Sheraton.

"I couldn't speak when they announced Mugly's name," said Bev Nicholson, the dog's owner. "I didn't know which way to look. I was shaking as much as the dog."

It's not the first time Mugly has been recognised for his unattractiveness. Nicholson said he was named Britain's ugliest dog in 2005.

The contest at the Marin-Sonoma Fairgrounds gets worldwide attention, with reporters and camera crews from around the world travelling to Petaluma, about 40 miles north of San Francisco.

Organisers say the competing dogs are judged for what they term their "natural ugliness in both pedigree and mutt classes."